One of the largest snowstorms in many years brought paralyzing snow accumulations to the Northeast over the President's Day weekend . Over 2 feet of snow fell in many locations (mainly on the 17th), with the major northeastern cities of Washington DC, New York City and Boston coming to a standstill while roads were cleared. 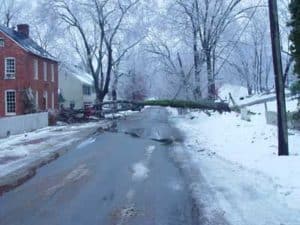 Tree down in Waterford Virginia 2003

It was the perfect storm. No, not the kind that someone will chronicle in a best-selling book. Not the kind that will have Hollywood types longing for the chance to make a blockbuster movie.

Perfect in the sense that, yes, it did snow, but the storm was not disruptive. Because temperatures were about freezing, it was easy to clean off windshields, driveways, sidewalks and interstates. Perfectly timed, too. It began after evening rush hour Thursday and ended before the morning rush. Crews were out all night plowing and treating surfaces so that by dawn roads were clear and commuters good to go. Perfect in the sense that it was a fitting end to a month that has been one snowy drama after another.

Today, as the snow continues to melt, is a day to rejoice. It is the first day of spring, meteorologically speaking. The National Weather Service has it own seasonal calendar, and winter runs from Dec. 1 to Feb. 28. It's easier charting things if seasons don't end in the middle of a month.

" It looks like the winter of 2003 will be etched in the minds of many people -- young and old -- for years to come," Ed Danaher, a National Weather Service meteorologist wrote yesterday on the service's Web site.

February was a month for the record books. It was the worst winter in the history of Maryland. More than 54 inches of snow fell in Baltimore, wiping out the old record of 51.8 inches set in 1863-64, according to Calvin Meadows, a meteorological technician for the National Weather Service.

In Washington, the latest storm left 5.1 inches of snow at Reagan National Airport, raising February's total to 28.5 inches and making it the third snowiest February on record. Since Dec. 1, 40.1 inches have fallen at the airport, the eighth worst winter in history. By noon the snow had ended, and by midnight, so had the amazing month.

Many people, sick of snow, snow days, shoveling, fighting for parking spots and those annoying winter storm warnings every week, were happy to see February go.

" I was relieved that February was over," said Mary Myers, spokesman for the District's Department of Public Works, "until someone told me that the Farmer's Almanac said March was going to be just as bad, which made me very unhappy. So we'll see."

There is always a chance March will bring more snow. The same atmospheric conditions that made the region ripe for snow are still in place, and experts say there are no indications of any change soon.

The good news is that there is no more snow on the horizon through the middle of next week. Any moisture that falls will be rain, according to Danaher.

" It looks like we are going to get a bit of a break in the next week or so," Danaher said. "But March still has potential for some big storms. In March we don't usually get much snow, but when we do it is usually a big storm."

The villain of this stormy winter is a meteorological condition known as a split-flow pattern.

" What that means," Danaher said, "is that the northern half of the country has had a flow from the northwest, which keeps the cold air in place for long periods of time. And the southern part of the country has had a western flow, which means that moisture from the Pacific has caused all the heavy rain in California and ice storms in Texas. What happens is the two systems converge, and the moist, warm air from the south collides with the cold air. As it rises, all the moisture is squeezed out as snow."

The position of the jet stream sets up the flow. The jet stream has put Washington smack in the middle of the split-flow convergence. In other words, snow city.

And it doesn't look like the jet stream will budge soon.

Danaher grew up in upstate New York. He lives in Springfield, and he sure doesn't tell his neighbors this while they are out shoveling, but he likes snow.

" I think most people can handle a couple of big storms," he said, "but there have been a bunch of them this year, and I think that's why people are kind of fed up."

February's gift, particularly, the monster storm over Presidents' Day weekend, is snow context. A storm bringing five inches of snow seemed a lot scarier on Dec. 1 than it does now after that big storm.

Yesterday, people came out and were actually doing a little snow trash talking.

Police reported hundreds of accidents. Five students from George Washington Middle School in Alexandria suffered minor injuries when their bus slid on North Overlook Drive. Two students bumped against a window, and three others slid on ice while getting off the bus, police said.

Prince George's County paramedics responded to 97 minor accidents between 6 and 10 a.m., or about one every 21/2 minutes, said Capt. Chauncey Bowers, spokesman for the county's fire and rescue services.

A Berryville, Va., man was killed when he was thrown from his vehicle and then struck by a pickup truck about 8 a.m. on Route 7 in Loudoun County. His name was not made public because authorities were trying to locate his family.

Many motorists complained of fellow drivers darting out of backups and driving too fast on icy shoulders and exit ramps.

" The snow was not that bad or that significant," said Cpl. Rob Moroney, spokesman for the Maryland State Police. "The problem was that drivers didn't yield to the few slippery conditions it did create."

Brad McKnight said it took 2 hours and 15 minutes to drive 18 miles from Fair Oaks to Rosslyn, normally a 25-minute drive. He said he saw two accidents on Interstate 66 and about 10 cars sliding into walls.

" The jokes in the office have been about everyone doing 80 miles per hour and tailgating and crashing, or they seemed to have the car in neutral for a slow coast," said McKnight, 28.

The morning commute continued until noon, just before the afternoon rush began, as people left work early hoping to avoid an equally bad ride home. Many parents brought their children to school, only to be told that they should take them home, because the schools were closing.