The Virginia Historical Society has called Gene a modern-day Jed Hotchkiss – the Civil War map-maker – because his maps are so detailed and are drawn by hand. Gene is a historian and mapmaker with offices in Waterford, Loudoun County Virginia. He is the author of 9 books on Virginia History, and provider of over 50 historical maps covering Virginia, other states and foreign nations. 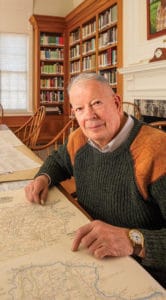 A recent aticle about Gene in Virginia Living magazine.

He holds an A.B. in Geography from Clark University, a graduate degree in planning from the University of Virginia School of Architecture and a graduate degree in American Literature from Georgetown University. He writes a column on History for the rural editions of the Washington Post. Born in the Bronx, New York, he has lived in Piedmont Virginia since 1965.

Gene Scheel's work has been featured in numerous journals, magazines, and newspapers. The Washington Post notes "his hand-drawn works of cartographic art are treasured as pictures of history."

All maps and books may be autographed, if desired. Maps are sent in priority mailing tubes costing between $8-$10. 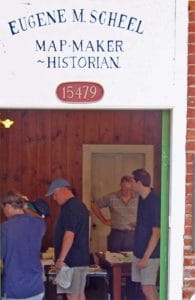 Eugene Scheel speaking with customers during the Waterford Fair

All maps are of Virginia, unless noted. All county maps cover from a mile to two miles into the adjacent counties.

Gene's maps usually have about twenty times the name detail of the 1:24,000 U. S. Geological Survey maps. They are carefully field checked, by auto and by foot, and correct many spelling and location errors on government maps. Historic names are noted as well as present names.

All maps are in color except if noted; most show all Civil War battles, actions, skirmishes, etc.; family graveyards, old roads, trails, stores, post offices, mills, American Indian villages, fish traps--always differentiating between what's standing today and what was once there.

American Indian Map of Loudoun County (2018), 13" by 19". Locates Indian settlements, travel ways, and areas where the seven tribes that once inhabited Loudoun, and adjacent regions, lived. Illustrations of a fish trap, typical village, and more fill the boarder. Routes of the first European explorers  (1692-1709) are also included.

Civil War in Loudoun County (2001), 13" by 19". Drawn in the style of an 1860's map. Battles and skirmishes are color-coded to indicate victories. The map also shows fortifications and is an accurate picture of Loudoun in the 1860's. $25 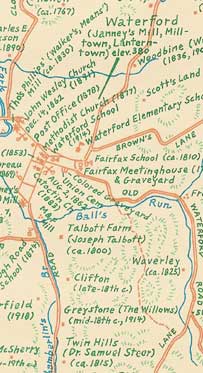 Example of a map by Eugene Scheel

Rappahannock County (1999), 27" by 31", also shows more than 300 historic houses and names of past owners. Very detailed. Inserts of towns and villages.

Short Hill (2016), 13" by 19". Extremely detailed map of the area between Blue Ridge and Rout 287 (Berlin Turnpike) including Lovettsville, Hillsboro, Potomac River south to the southern tip of Short Hill, and inserts of Morrisonville and Neersville. $20

Washington-Dulles International Airport (1982), 31" by 33". Prepared for the airport's 20th anniversary. Shows areas from Leesburg east to western Fairfax, and south to Manassas. This map named the airport. Only a few left.

Loudoun Discovered - Communities, Corners & Crossroads. A series of five volumes (2003), approximately 900 pages plus folded or flat map of Loudoun County. The history of the 120-or-so towns, villages, and communities in Loudoun County. Volumes may be read  individually at the Thomas Balch Library. Mr. Scheelonly sells the complete set plus map for $100.