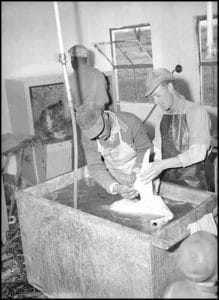 Workers at Greenfield Farm in Loudoun County place turkeys in scalding water to help in the removal of feathers in this 1950s photo. (From The Thomas Balch Library)

In 1940, when he was not yet 30, Edgar J. Orme left the corporate world, and he and his wife, the former Nancy Luttrell, bought Greenfield Farm -- 343 acres on Hogeland Mill Road south of Leesburg -- for $26,000. The property included a 1763 brick house, assorted outbuildings and tenant houses and a dilapidated mill.

Orme then studied agriculture for a year at the University of Maryland. In the course of meeting county farmers, he became friends with Walter Grant, whose Hillbrook Farm near Hamilton was one of the two major turkey farms in Loudoun. The other was Morven Park, home of former Virginia Gov. Westmoreland Davis. Grant "got everybody into turkeys, you know," Orme said.

World War II was underway, and with the military's demand for meat, Grant convinced Orme that raising turkeys could be profitable. Besides, Orme told me when I interviewed him and his wife in the spring, "I loved to eat turkey."

Before he could start selling the birds and their eggs, however, Orme had to give the turkeys a home. Coops called colony houses had to be built. The Ormes had 15 to 20 colony houses, each holding as many as 500 baby turkeys, called poults.

"For about three months they were very delicate, more so than baby chicks. Then the poults feathered out and became hardier than chickens," Edgar Orme said.

Nancy Orme recalled having to shoo the poults inside their houses during heavy rains, "or else they would drown. They were so dumb."

Each colony house had a brooder stove and a sun porch to keep the poults warm. The houses were built on stilts and were enclosed with wire mesh to limit vermin and foil predators.

After feathering out, the birds left the colony houses and began grazing. As foxes and raccoons were always close by, a small, portable caretaker's house was placed in the field. A husband and wife, armed with a rifle to shoot predators, lived in the house. At night the turkeys would sleep on portable roosts. An undue amount of cackling would signify a miscreant's close presence.

The caretakers also had to prevent stray chickens and other fowl from joining the flock. Nancy Orme told me that such birds were thought to carry a disease called pullorum, contagious to turkeys, which could infect and kill entire flocks. "We'd also had to be very careful about letting people on the farm who had been around chickens," Edgar Orme said.

When the grass was depleted in one field, the turkeys, roosts and caretaker house were moved to another. This custom of moving turkeys from field to field dated from Colonial times.

The caretakers in the field also collected turkey eggs. The Ormes told me that turkey eggs, at least twice as big as chicken eggs, brought in more money than the turkeys. Some eggs sold for 60 cents apiece at Harrisonburg, their standard destination in the lower Shenandoah Valley. In surrounding Rockingham County, hatcheries owned by Mennonite farmers were big buyers of the Ormes' eggs, which were then placed in incubators. The farmers would also purchase poults, paying $1.25 for each young tom. The county was and still is the largest producer of turkeys in Virginia.

"We'd usually keep all of the hens and a few of the toms," Edgar Orme said. The meat of the hen was considered more tender than that of the tom.

After the three-month breeding season ended in early June, the Ormes and their employees focused on killing and processing the older turkeys, which weighed 30 to 40 pounds. The birds were caught with a long metal hook that grabbed a leg. "When the weather was cold," Orme recalled, "the turkeys would hit you [with their wings], and you'd think Joe Louis had hit you."

An electric knife then cut the turkeys' throats. The electric charge shocked the bird. "We didn't want a lot of flopping around," Orme said.

The headless turkeys were then placed in a tank of scalding water to loosen their feathers, which were removed by a rotating drum with rubber fingers. "The fingers would beat the feathers off," Orme said. "Sometimes we had to hold the turkeys over the drum for 10 minutes to get the feathers off."

Five girls were also employed to remove by hand any feathers that remained. "I think we paid them 50 cents an hour," Orme said.

A crew of seven or eight at a long eviscerating table would then remove the turkeys' innards. (These parts were cooked, mixed with barley and oats and fed to hogs, which had trouble digesting uncooked innards.) The cleaned birds were placed in ice water to remove dried blood and then put in cellophane bags and boxed and frozen with tons of ice from the Leesburg ice plant.

The Ormes employed a half-dozen men in the operation. "We paid them up to $3 a day. Some lived on the farm. Help was not hard to get during the war, because if you worked on a farm, you weren't drafted," Orme explained.

Kenneth Yockers supervised the operation. "He'd come from Morven Park, which stopped raising turkeys after Westmoreland Davis died [in 1942]. Grant and I bought most of his equipment," Orme said.

Other than the U.S. government, the Ormes told me the biggest buyer of their turkeys was the Peoples Drug Store chain. The stores had lunch counters during the 1940s and '50s.

"They really had a good racket going -- a cup of coffee or a soft drink, a chicken-salad sandwich, which was really turkey with a tiny bit of chicken to make it legal, and a dessert for 25 cents," Orme said.

The drugstore preferred turkey because it was far easier to strip meat from one turkey than from four chickens.

Few markets at the time carried whole, dressed birds, and those that did marked them up considerably -- a nickel to a dime more per pound above the Ormes' farm price.

So, because the Ormes had a large freezer, stocked with ice from the Leesburg plant, they sold boxed turkeys themselves: 45 cents a pound for hens and 42 cents a pound for toms, according to a 1957 newspaper advertisement. Nancy Orme remembered being on the phone for hours taking orders from locals for frozen turkeys before Christmas, George Washington's birthday and, of course, Thanksgiving.

Their peculiar popularity at this holiday stems, of course, from the native American bird being eaten at the first Thanksgiving, a three-day feast at Plymouth Colony, Mass., after the Pilgrims' first harvest in the New World in 1621. In the late 1950s, refrigerated dressed and boxed turkeys from California could be bought at markets for several cents less than what the Ormes needed to make a profit.

The last of the large turkey farms in Loudoun started raising hogs in 1959, after Peoples closed its lunch counters and stopped serving its turkey salad specials.