For Some Slaves, Path to Freedom Was Far From Clear-Cut

More on the African-American experience in Waterford 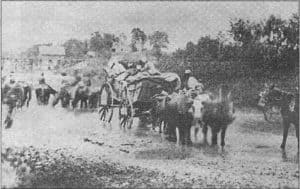 1862 photo by Timothy H. O'Sullivan of fugitive blacks crossing the Rappahannock River as they flee Culpeper

President Abraham Lincoln's Emancipation Proclamation took effect on Jan. 1, 1863, declaring that "all persons held as slaves" in regions under Confederate control were to be "forever free."

The proclamation, under consideration since July 1862, had been issued Sept. 22, 1862, five days after the Union victory at the Battle of Antietam. The document specified that if rebelling states returned to the Union, their slaves would not be freed. The proclamation did not apply to the border states of Delaware, Kentucky, Maryland and Missouri, "the forty-eight counties designated as West Virginia," five Tidewater Virginia counties and the cities of Norfolk and Portsmouth. Those areas were then under Union control.

The decree encouraged more than 400,000 slaves to flee their masters and seek refuge in areas held by Union forces. Even before "Proclamation Day," as Jan. 1 would later be termed by many area African Americans, more than 100,000 slaves had fled the Confederacy.

In reading the following local reaction to the escaping slaves and the Emancipation Proclamation, bear in mind that nearly all the comments are from slave owners.

"From the day that the Northern Army first invaded Virginia to the present moment, it has been its habit to entice slaves to abscond and in some instances where they have been faithful to their lawful owners and refused to run, they have been forceably taken away," farmer Edward Carter Turner of Kinloch, a 1,500-acre plantation northeast of The Plains, wrote in his diary in December 1862.

The Union army had invaded Loudoun County in late February 1862, and by late March, the same Pennsylvania troops had entered Fauquier County. Some freed slaves joined the Union armies and navies. But Union Gen. Ulysses S. Grant wrote in a letter to his family that more worked as "teamsters, hospital attendants, company cooks, and so forth, thus saving soldiers to carry the musket. I don't know what is to become of these poor people in the end, but it weakens the enemy to take them from them."

There were 10,455 slaves in Fauquier in 1860, 48 percent of the county's inhabitants. In Loudoun that year, 5,501 slaves made up one-fourth of its population. Loudoun's many Quakers, who did not own slaves, accounted for the difference in percentages.

The first specific instance of area slaves escaping during the Civil War was noted in the diary of Catherine Barbara Broun, wife of Edwin Conway Broun, Middleburg postmaster and storekeeper.

"Servants are running off from all parts of the country," she wrote on April 30, 1862, as Union forces were occupying the town and countryside. "Poor things they think they are going to their friends [the Union forces] how disappointed they will be but we want them to go out and try them."

Her next day's entry appeared to blame the exodus on "the emancipation bill," not Lincoln's but one of many forwarded by Union abolitionists. Broun wrote of "great dissatisfaction" with the bill, but she failed to say who was dissatisfied.

Turner first wrote of the Emancipation Proclamation on Oct. 1, 1862.

"I understand that Lincoln has declared his intention to liberate all slaves in the South as far as his lines extend and confiscate all rebel property and the work is to begin the first of January 1863," he said. "Our hope is that a just God will thwart his design, at least as far as the innocent are concerned."

On Dec. 25, "a beautiful Christmas morning" and "a most quiet Xmas," Turner wrote that the mood at Kinloch was somber. "Stagnation even among the negroes. Too few are left to get up a frolic and their thoughts are probably occupied with matters more serious. The day has almost arrived when President Lincoln says they are to be free."

Turner wrote that he assumed that "a large proportion" of his few remaining slaves "are looking forward to that day with hope that this promise will be realized," adding "that as free men they will remain here and do for themselves."

He said "much the smaller number" of his slaves and the slaves of nearby landowners "have no desire to change their condition and will probably go on as usual with contentment to themselves and satisfaction to their owners."

Those were Turner's last known comments on the subject, for his subsequent Civil War diaries are lost.

Many years ago, a member of the Horner family of Mountain View (now Dondoric), southwest of The Plains, told me about a conversation between his father and one of his slaves. "When the Emancipation Proclamation was issued, my father told him of it and that he was a free man, and he was not able to pay wages. 'Well,' said the faithful old servant, 'I promised Mars Richard [Horner] to stay 'til he come and I'm going to do it and take care of things.' "

Fielding Lewis Marshall of Ivanhoe, west of Marshall -- named for his grandfather, Chief Justice John Marshall -- said in a postwar essay that "none of my slaves deserted me or left Ivanhoe during the whole war."

He praised a host of loyal slaves and said he, a slave owner for 30 years, and his brothers and sisters "treated the slaves as children and loved them . . . and took care of them. . . . They [the slaves] considered themselves, and were treated by their masters, as part of the family."

The Bentons of New Lisbon (now Huntland), north of Middleburg, also did not lose slaves as a result of Proclamation Day. Benjamin Hyde Benton had headed the Lisbon Institute, a classical academy, since the early 1840s. In defiance of an 1832 state law, he taught his 15 to 20 slaves to read and write.

Although the Lisbon Institute had closed by 1853, Benton and his sister-in-law, Margaret Harrison Benton, continued to teach their slaves to read and write during the war, and when they learned of the Emancipation Proclamation, she started instructing the slaves in a trade.

Brothers Karlton L. and Charles Monroe, descendants of the Bentons and famed public school educators during the early and middle years of the 20th century, told me that not one slave left New Lisbon during the war.

The "Black Laws" of 1832, instituted because of Nat Turner's

Southampton County slave insurrection, also prohibited slaves from worshiping unless an overseer was present. But on Sept. 5, 1862, Catherine Broun wrote in her diary about blacks worshiping at the "African Church," Asbury Methodist Church, which had lost its white congregants who had been "northern" Methodists.

John Berry, whom I interviewed at length in 1977, then lived in the former Methodist Episcopal Church on Wirt Street in Leesburg. The "northern" Methodists had built the church sometime after 1845, when the group split over slavery. Berry said slaves began to worship at the church after Proclamation Day and continued to do so throughout the war. The slaves were Berry's ancestors.

One aspect of Lincoln's Emancipation Proclamation is mentioned by three chroniclers, all of whom were avowed secessionists: Northern soldiers were not fighting to free the slaves.

Writing in a diary from Belle Grove, her plantation south of Paris, Amanda Virginia Edmunds penned this terse comment on Aug. 14, 1862, after she had evidently heard of Lincoln's proposed emancipation bill that July. "Numbers and numbers of [Union] deserters are passing all the time. Now they will not fight for the negroes."

Catherine Broun echoed Edmunds's comment on Jan. 25, 1863: "Democrats and Republicans are almost fighting amongst themselves in the North. Their own papers say there is great dissatisfaction in the army, that since the Proclamation freeing all servants they say they have been fighting for the union and now since it is the negro they are fighting for 'they will not shed blood for the negro.' "

Round Hill physician James E. Copeland, a youngster during the Civil War, added his words in the Loudoun Times-Mirror on Aug. 26, 1926:

"The Federal generally did not endorse Lincoln's Emancipation Proclamation that was issued not for any love for the negro but to weaken the South. Bob Furr, a free negro boy [who lived near Hillsboro] stood along the line of march when a soldier rushed toward him and exclaimed: 'If I knew I was fighting to free you, I would put a bullet through your body.' "

In a little more than two years after Proclamation Day, the 13th Amendment to the Constitution would replace the Emancipation Proclamation. On Feb. 1,1865, Congress passed the amendment, freeing all slaves in the nation and in any area subject to its jurisdiction. Its passage was one of Lincoln's last victories. He would not live to see the amendment formally ratified by the states on Dec. 6, 1865.