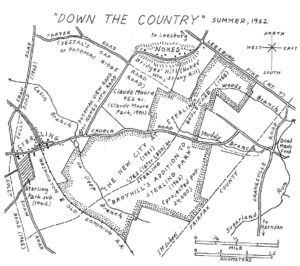 For many years, “Old Sterling” was an active commercial center in eastern Loudoun, off Church Road along the Alexandria, Loudoun and Hampshire Railroad. Now known as Ruritan Road Location

and Ruritan Circle, Railroad Avenue was the main drag through the old village, and several commercial structures and large homes were built along the street and on both sides of the tracks.

From the mid-1800s until the years leading up to the Great Depression, Old Sterling — originally called “Guilford” and later, “Loudoun” — competed with Ashburn, a few miles down the railroad tracks, in its effort to attract tourists and new businesses.
The railroad was already there when U.S. President James Buchanan came to visit in 1859 and 1860, stopping at the Sterling Hotel near the depot run by the Summers family. At about the time, a post office was opened in the village and named “Guilford Station” by Richard Havener, the first postmaster.

In 1872, after the AL&HRR became the Washington & Ohio Railroad, then-Postmaster John M. Hanford had the name of the village changed to “Loudoun,” since it was the first stop in the county for westbound trains. Levi Hanford took over as postmaster shortly afterward, and began subdividing lots around the village.

“To call the area Loudoun would have been confusing, and evidently such confusion prompted the change to the name to ‘Sterling’ in 1887,” according to Loudoun historian Eugene M. Scheel. “The new name had its origins in Norman pennies of the 11th and 12th centuries; the coins were called sterlings, and the sterling afterwards became the British pound sterling.” By then, Thomas F. Sexton was the postmaster.

The railroad was the engine that drove the local economy, and by the1880s, attracting Washington, D.C. residents wishing to escape to the country by train for a weekend or the summer affected much of the commercial growth. Competition for this business was tough: the railroad passed through Herndon Heights, which also had attractions, before reaching Sterling. If tourists stayed on the train, they could head further out to Ashburn, and points west.

In “Eastern Loudoun: ‘Goin’ Down the Country,’” Scheel quotes an anonymous newspaper writer praising one the offerings in Sterling: “Broad Run, with touches of romantic scenery more substantial fishing, furnish chance to expend sport, muscle and sentiment to anyone anxious to ‘get up steam’ with the hot weather.
According to Scheel, “Visitors had their choice of five or six stores to shop in, and they say, five barrooms.” Industry came to the village in 1908, with the establishment of the Sterling Grain Company, which was first operated by steam, then gasoline, and finally electricity. But the heyday for many of the businesses in Sterling was over by the early 1900s, with several merging or going out of business.

The strongest to survive was the store run by the partnership of Carl O. Whaley and Will Groom, who ran the Sterling Emporium (later called the Sterling Mercantile Company) until 1926. They also had a successful lumber and farm supply business in the village, and across Railroad Avenue from Oscar Thompson’s Saddlery, and Flavius Tavenner’s wagon and carriage shop.

Besides the competition, other forces were at work undermining the main businesses in Sterling. The advent of the automobile and improved highways gave tourists access to the hostelries being built in the Blue Ridge, bypassing the village altogether. When the Sterling train depot burned in 1920, it was replaced by a smaller structure–the demand just wasn’t there. A complex of pens and scales for cattle to be shipped to Baltimore and a sawmill were built near the depot, but even these businesses were gone by the early 1940s.
The Great Depression also took its toll, with Sterling Mercantile and the Grain Company closing for good about 1934. But one business was started and would be around for a while. Charles M. Page and Ernest Smith opened the Sterling Supply in the buildings that once housing the saddlery and wagon shop, selling lumber, building materials and farm supplies.

Sterling Supply soon became a Southern States franchise, and in 1954 the business was moved into a larger building across Railroad Avenue. Scheel notes that, “Sterling Supply was sold to Marion Caylor in 1955. The business has been closed for decades, an eventual casualty of the ‘new’ 1965 Church Road to the south of the old road, renamed Ruritan Circle in 1989.”

In 1879, Loudoun County School District No. 6 purchased a one-acre lot in the village for $60, and built a two-room schoolhouse in the village that opened the following year. Remarkably, it would serve until students until 1947, when the Loudoun County School Board opened the new brick Sterling School across Church Road, on a five-acre tract of land that they purchased from James and Nellie Ryder for $1,250.

Closed in 1975, the brick school now serves as the Sterling Community Center.

Sterling United Methodist Church dates back to 1875, when it was established as the Methodist Church in Guilford, and met in an old one-room schoolhouse located across from the village on present-day Church Road. “In 1879, the building and one acre of land was purchased for $200 to be used as a church,” according to the SUMC history. The name of the church was changed in 1890, when “Guilford” became “Sterling.”

In March 1897, the church burned to the ground, and a new building erected on the site. This church building served until 1983, when a new Unite Methodist church was built at 304 E. Church Road, and the old building deconsecrated. It is now used as offices and storage by a landscape design firm.

Guilford Baptist Church on Ruritan Circle was founded in 1857 as Lebanon Grove Baptist Church, and was renamed “Guilford” in 1873. Scheel wrote that in 1880, the congregation purchased an acre lot in the village from William F. Sexton for $20, and completed their church building there in 1882.

For 85 years it was a circuit church, sharing a minister with Calvary Baptist Church and Mount Hope Baptist Church. It was closed periodically in the 1940s and 1950s, but has remained open since 1954. “The church has had periods of growth and health and also several periods of decline since that time,” according to the church history. “In June 2005, a church planting group from Capitol Hill Baptist Church, led by our current pastor Mike McKinley, joined the congregation. Since that time, the Lord has blessed our fellowship with a renewed vitality and ministry.”

According to long-time former Old Sterling resident Hugh Ball, great changes took place in the village when Church Road was straightened–bypassing the buildings in the village that the project didn’t destroy–and the building of Dulles Airport, which resulted in rezoning to encourage expanded commercial growth nearby.

Over the years, nearly all of the commercial structures and several homes have been lost. In 1971, the decrepit Sterling Emporium was burned by the local fire companies for practice—a fate shared by the Sterling Hotel in the 1980s. While the buildings used by the old Sterling Supply remain, no trace of the grain mill (burned in 1970), railway depot or the various barrooms remains. Even the familiar old roller skating rink, a fairly recent addition to the community, was demolished, and warehouses built on the site.

Betty Geoffrey lives in what is probably the oldest residence in the village, and operated Sterling Schoolhouse Antiques in the old two-room school from 1980-2007; it is now used as the office for a construction company. Mrs. Geoffrey notes that the area continues to endure rapid change. “I have friends who have come to visit me after being away for a few years, and they can’t even find the place,” she remarked.

A somewhat isolated enclave, Old Sterling is unique in many ways, but shares a fate that typical of the villages of the past.