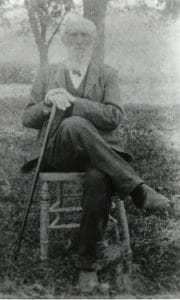 In 1784, Virginia farmers like John Binns in Loudoun County were having trouble with the effects of continuous farming their land. Binns was not inclined to move inland, like many East Coast farmers, and wondered if one could rejuvenate the soil. European farmers for centuries had manured the land in a variety of ways, but in the colonies, livestock largely ranged free, and was, in fact, fenced out of planted fields and gardens, making the collection of manures difficult at best.

He had learned of the use of land plaster (gypsum) and clover for that purpose in the Philadelphia neighborhood, whence it is said the system had been brought from Leipsic in Saxony.

As early as 1780 he began his experiments, using not only the land plaster and clover but practicing deeper ploughing and rotating crops. At first he was, of course, ridiculed by his farmer neighbors, for the reluctance of the husbandman to change his methods is an old, old story.

But Binns persisted. As he improved one farm and his profits rose, he purchased other worn-out lands from their discouraged owners and in time was profiting handsomely from his intelligence and industry.

After eight years of following this process, Binns found that corn yields had doubled and that yields of wheat, now a valuable export crop, had quadrupled. In 1793, Binns started to acquire large and small tracts of land in Loudoun County. He moved from his farm on the southern side of Leesburg to an estate near Waterford which he named Clover Hill. By the mid-1790s was buying up other properties and bringing them back into production using what was by then referred to as the “Loudoun system”.

At length, in 1803, his labors crowned with success and the agricultural wealth of his home county rapidly rising as a result of his long and patient work, he sat himself down to write the story of what he had accomplished. 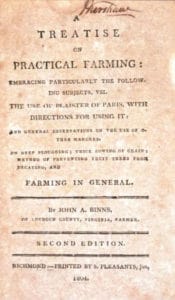 Cover of A Treatise on Practical Farming

His little book was printed in a very small edition, due probably to the high price and scarcity of paper, and was offered for sale at fifty cents, under the comprehensive title A Treatise on Practical Farming, embracing particularly the following subjects, viz. The Use of Plaster of Paris, with Directions for Using it; and General Observations on the Use of Other Manures. On Deep Ploughing; thick Sowing of Grain; Method of Preventing Fruit Trees from Decaying and Farming in General. By John A. Binns Of Loudoun County, Virginia, Farmer." It was published at "Frederick-Town, Maryland," and "Printed by John B. Colvin, Editor of the Republican Advocate, 1803."

The result of Binns' work was acclaimed throughout Virginia. His methods became known as the "Loudoun system” and the term became as significant and popularly familiar as the "Norfolk system" of farming in England. The three fundamental supports on which agriculture prosperity in Loudoun County rests were never more clearly or soundly appreciated: gypsum, clover and deep plowing.

In 1813, John Binns died leaving Clover Hill to his wife and nieces. Binns also made provisions for his enslaved to be freed when they reached the age of 25. Binns left $500 to his brother Thomas Neilson Binns to assist in freeing the enslaved where they were to be taken to Maryland and given their freedom. If Thomas refused, the $500 was to go to another Binns relative to take on the task.

The legacy of John Binns was neither that he originated new practices or that others followed his lead. Rather, John Binns was someone who saw land and labor wasted in backwardness and tried to make change for the better.

Edited copy from the Bay Journal Nov 1, 2002 and the Legends of Loudoun: An Account of the History and Homes of a Border County of Virginia's Northern Neck (1938) by Harrison Williams