The Great Cold Wave of January 1912 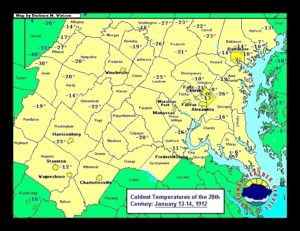 Coldest Temperatures of the 20th Century

A record cold wave settled in over the Northern Virginia, Maryland region. Records set in Maryland during this period remain to the present day. It was close, but not quite cold enough to break the records in Virginia set during the February 1899 "Great Arctic Outbreak". The cold wave of 1912 hit on January 5 and continued until February 16. It was one of the most severe and longest in duration on record. Ice formed on the rivers and the Chesapeake Bay. On January 13, Oakland in far western Maryland recorded the state's all time record low temperature of -40°F. In Washington, DC, it reached -8°F. On the 14th, College Park reported -26°F, Hagerstown -27°F, Frederick -21°F, Laurel -19°F, Baltimore -2°F and Washington, DC -13°F. The coldest temperatures in Virginia were -25° at Lincoln (Loudoun County) and Dale Enterprises near Harrisonburg. Fredericksburg was -11°F and Culpeper fell to -20°F. In the Eastern West Virginia Panhandle, temperatures ranged from -14° at Lost City in Hardy County to -30° at Bayard in Grant County.

An excerpt from the book, When Waterford & I Were Young, by John E. Divine. This book shares the author’s experiences and love of Waterford as he grew up in the early 1900s. About this book

January 1912 must hold the local record for bitter cold. At Clifton, an old farm just south of town, Leroy Chamberlin's wife Charlton noted in her diary on the 6th that things were freezing in the house and cellar, despite the wood stoves. On the 9th a high wind brought in still colder temperatures, accompanied on the 12th by heavy snow. By the evening of the 13th, the thermometer read 14 degrees below zero, and even heavy covering could not keep the apples in the cellar from freezing. The next morning the mercury stood at minus 25! " Went to the barns at 5:30 A.M...horses literally covered with frost. Decidedly the coldest weather that has been known here. 30 below in Waterford...."

The struggle with January continued. On the 16th, " Very high wind all night and today. Snow drafting badly. Tried to go to milk train [at Paeonian Springs] in morning. Could get only halfway-road completely closed. All the streams frozen, had to cut holes in branch for stock to drink...all stock suffering from cold. 17th...went with horses to help open roads. Three teams and about 15 men out. Assisted in cutting through about a half mile drift...reached Paeonian at noon. Brought back empty [milk] cans." There is a lot to be said for central heat, insulation and snow plows.