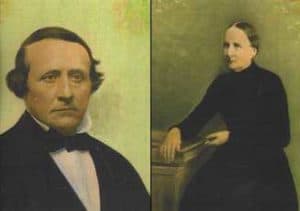 Two farms 30 miles apart, Huntland in Loudoun County and Cooling Springs in Frederick County, Md., share an important role in African American history. For decades before and during the Civil War, they were stations on the Underground Railroad, a name that became popular for routes taken by escaping slaves after railroads became common in the late 1840s.

Through Loudoun and Frederick, its northern neighbor, more than 1,000 slaves trekked to seek freedom in Northern states and Canada. 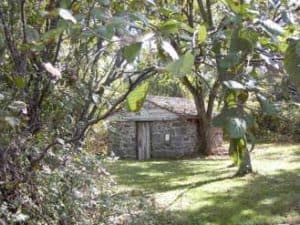 What freedom seekers saw: the Spring House, hidden beyond the bridge past the creeks of Cooling Springs Farm. Frank and Emily Wanzer, Barnaby and Mary Elizabeth Grigby, and two unknown others are thought to have passed through Cooling Springs Farm on Christmas Eve, 1855, and might have been sheltered in the Spring House after the six had escaped that morning from Oak Hill Plantation near Leesburg, Virginia, 15 miles south of Cooling Springs where they had been enslaved. The next day, Christmas, while the party of six was traveling north from Cooling Springs to Pennsylvania, one of the unknown freedom seekers was shot and killed by slave catchers, the other captured and re-enslaved. The Wanzers and Grigbys escaped at gunpoint, went on north, and lived the rest of their lives in Canada.

It was a crime to help an escaping slave until the 1793 Fugitive Slave Act was repealed in June 1864, during the closing stages of the Civil War. Even after the war, escapes in the Piedmont were not talked about publicly. Memories that divide might best be forgotten, and so the location of safe houses has been passed on by oral tradition.

From Huntland, north of Middleburg, to Cooling Springs, across the Potomac in Frederick County, the journey for escaping slaves took two to three days, after which the escapees were 30 miles from presumed safety in Pennsylvania. In 1847, that state prohibited the enforcement of federal laws that ensured the return of fugitive slaves.

Even before 1847, Pennsylvania and other Northern states did not enforce laws involving fugitive slaves. The many Brethren, Mennonites and Quakers in Pennsylvania, among others, all anti-slavery, provided the connecting links to abolitionist havens in Philadelphia, the City of Brotherly Love.

Still, uncertainty about whether Pennsylvania law trumped federal law led many fugitives to seek sanctuary in Canada. In 1826, its parliament enacted a law prohibiting the return of fugitive slaves to owners, and in 1833, Canada abolished slavery.

Huntland's role as a safe stop in the Underground Railroad had eluded my mind for decades. Then, in the fall, my history class of Loudoun County teachers visited the estate. While farm manager Jerry Coxey was talking to our group, my mind wandered, revisiting a scene of a generation past.

A caretaker had told me about a pre-Civil War tunnel beneath the iron gate in the serpentine brick wall bordering the front lawn. The tunnel ended in the east wing of the house. She told me that escaping slaves used the passageway. However, she said, the tunnel had recently been blocked off. Later, I saw a snip of paper in the Huntland file at the Thomas Balch Library. Someone had scribbled on it, "said to have been a way station for runaway slaves."

Brothers George and Herman Brown owned Huntland in the 1950s and '60s. Since Lyndon B. Johnson's days as U.S. Senate majority leader and vice president, the Browns, Texas oilmen, had hosted Johnson at the Huntland house. In 1955, Johnson suffered a heart attack at Huntland, and Middleburg physician James "Jimmy" Gibson was the first medical professional on the scene.

In 1964 or '65, when Johnson was president, the Secret Service decided it would be best to seal off the tunnel and fill it in, especially because the entrance at the brick wall was on Pot House Road and difficult to observe from the estate house and grounds.

Before 1912, when the wings of Huntland were added, the interior end of the tunnel ended on a grassy down slope. Anyone exiting the passage could not be seen from the road. Escapees then hid in outbuildings, where the smells of animals and feed masked the odor of humans.

Not all the members of the Benton family condoned the abetting of escapees, and some owned slaves. Space helped the clan take a live-and-let-live attitude, as five nearly contiguous Benton family farms totaled more than 2,000 acres. In a 1962 letter to a cousin, Grace B. Benton wrote this about her great-grandfather, William Benton, the builder of Huntland (then called New Lisbon) in 1837. "He did not believe in secession or slavery but he did not object to his sons standing by the South."

I recently spoke with William Benton, great-great-grandson of the builder. Benton said he and other family members had always heard that the tunnel had been used as a conduit for escaping slaves. He specifically mentioned the McQuay family of St. Louis telling him so. Its members were Benton slaves before the Civil War and farm helpers afterward.

Betsee Parker, the present owner of Huntland, who had not spoken with Benton, also learned from former Huntland residents and descendants of Benton family slaves that the tunnel was an escape route for slaves.

Grace Benton, the present William Benton's aunt, provides a hint in writing about the first William Benton. "There were more trees than cleared land," Grace Benton wrote of the countryside about New Lisbon in her great-grandfather's time.

This near-continuous oak and poplar forest, clear of brambles, and the gentle unpeopled terrain of Catoctin Mountain, made the escape route north relatively easy to negotiate. Non-slaveholding and usually sympathetic Quakers and Germans lived to the west of the mountain.

At the Potomac River, the numerous Broken Islands afforded a way across, although not an easy one in high water. Then the mountain again, with Hall Town, a village of free blacks, on the east slope, two miles from the river. To the east, 1,200 acres of six contiguous Michael family farms provided a safe area for escapees. The Michaels also owned a Catoctin Mountain wood lot near Hall Town and were among the founders of nearby St. Paul's Episcopal Parish, integrated since the church was built in 1842, and also a safe house.

I met Peter H. Michael some years ago, when my African American history class of teachers visited his farm, Cooling Springs. The spread was settled by his great-great-great grandfather, Andrew Michael, in 1768.

As with the Bentons, the Michaels were split over slavery. Andrew Michael's son, also Andrew Michael, owned slaves, but he freed them a year before his death in 1851. His son, Ezra, did not own slaves. Peter Michael credits Margaret Michael, Ezra Michael's second wife, of the abolitionist Dudderar family, as the person who might have changed her father-in-law's mind.

"Father and son were close," Peter told me. "They certainly must have leaned on each other. Both lost wives within a year of each other," in 1839 and 1840, Ezra Michael's first wife in childbirth.

Recollections from 16 Michael family members and other historians in Frederick County agree that a stone springhouse, a good distance from the main house, and 150 feet from the Baltimore & Ohio Railroad tracks, was the safe house for slaves.

William Still's classic 1872 book, "The Underground Railroad," published in Philadelphia, noted that several escapees followed a route in Frederick County "on the Baltimore & Ohio Railroad" and on "the mail route," which before the Civil War was the railroad. Such documentation is as close as one might find in the Piedmont.