Kenmore House
One of the Finest Examples of American Colonial Architecture

For information about visiting Kenmore, visit their web site

. Ferry Farm is the related nearby Washington property. 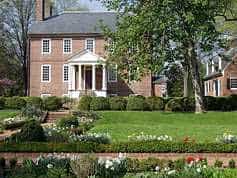 The cognoscenti of American Colonial architecture say the finest of that period's decors may be viewed at Kenmore, the Fredericksburg home of Revolutionary War patriot Col. Fielding Lewis and his wife, Elizabeth "Betty" Washington, George Washington's only sister.

My first acquaintance with the couple came many years ago, while I was looking for a family graveyard at Western View, an isolated farm in Culpeper County. Among worn tombstones enveloped in creeper and ivy was a marker, placed in 1927 by the Culpeper Minute Men chapter of the Daughters of the American Revolution. The tablet noted that Betty Washington Lewis was buried there in March 1797. She had been visiting her daughter, Elizabeth "Betty" Lewis Carter.

Mildred Jones, who attended the marker's unveiling, told me later that the ladies could not find a gravestone for Mrs. Lewis, so they told historian Douglas Southall Freeman, then planning his seven-volume biography of George Washington, to pick the location.

"He was embarrassed," Jones said, "but he walked around a bit, stopped and pointed at the ground."

Detailed plaster work over the mantle picturing Aesop'd fable, "The Fox and Crow".

On May 7, 1750, Betty Washington was six weeks shy of her 17th birthday when she married Lewis, 25, a widower with two young children. His first wife, Catherine, a cousin of George Washington's, died in childbirth along with the infant.

Lewis was a well-off Fredericksburg merchant, who, like his father, owned and leased ships that traded with British Caribbean colonies. The family's store stands today at 1200 Caroline St.

The vessels would carry tobacco, produce, wood products and European-made goods to the West Indies. The brigs would then return to Virginia with fruit, sugar and salt, rum and, on occasion, slaves. Profits from trade were more assured in Fredericksburg than in the larger port area of Hampton and Norfolk because Fredericksburg was close to the wealth of the Virginia Piedmont.

In 1752, Lewis asked his brother-in-law and good friend, George Washington, to survey 861 acres, the core of a 1,322-acre plantation that would become Kenmore. (The name was not coined until about 1820.) Pleased with the land the survey encompassed, Lewis then bought the tract. He was about to begin an auxiliary career as a planter, which would enable him to sell his own produce.

The acreage, vast for the Virginia Piedmont, was typical in size for a man of the Tidewater gentry. His slaves would soon number more than 80. They and their white overseers planted the area's staples: corn, wheat and tobacco.

In 1760 Lewis began a third career by entering politics, replacing a deceased burgess from Spotsylvania County and then being elected to the House of Burgesses (equivalent to today's General Assembly) through 1768. Those were the years of British taxation on imports to the American colonies.

During this time, Lewis decided to build a house at Kenmore, where he and Betty could raise their large family. But the rift over taxes led to postponement and delays in his house plans, since such items as paint, glass and hardware came from England.

Matt Webster, Kenmore's architectural historian, with whom I toured the mansion earlier this year, told me that only three artisans employed by Lewis are known by name: Pompeii, a blacksmith from the West Indies who fashioned thousands of nails; John Gwyn, a carpenter and joiner; and Joseph Smith, a painter and indentured Scotch servant.

Webster said that Kenmore's design -- two stories, eight rooms, about 4,700 square feet plus a full cellar -- was probably based on plans by William Adam, a Scotch architect. Five of the youngest of Lewis's 10 children and two or three servants lived at "Col. Fielding Lewis's," the common designation for the home during Colonial times.

Kenmore's exterior of 317,000 bricks is austere and pristine. The only standing home I can recall of similar style and merit in the Virginia Piedmont is Culpeper County's Salubria, built for Anglican pastor the Rev. John Thompson and his bride, Anne.

Webster said that in Tidewater Virginia, exteriors like Kenmore's were not unusual but that most of the edifices were destroyed in the Civil War.

"There is nothing in the United States like these ceilings," Webster said.

The unknown plasterer also fashioned the decorations for the small dining room at Mount Vernon about the time he was rendering the Kenmore designs.

Lund Washington, George Washington's cousin and overseer, mentioned the plasterer in letters to Washington in 1775: "[He] can plaster in one day more than our two men can in a week. . . . The stucco man agrees the ceiling [at Mount Vernon] is a handsomer one than any of Colonel Liews [sic], altho not half the work in it."

Shortly after June 1775, when Congress appointed Washington "general and commander in chief of the forces raised in the defense of American liberty," Lewis financed a "Gun Manufactory," its records extant.

His first letter to Washington about "our little manufactory," dated February 1776, said they had "been mostly repairing old guns." Lewis expected production of muskets to begin in March, with a 10-gun-a-day quota.

A January 1781 letter to Thomas Jefferson from Charles Dick, the gunnery's manager, noted that at least 1,001 "good guns" had been fashioned and that "the gentlemen of this town and even the ladies have very spiritually attended at the gunnery and assisted to make up already above 2000 cartridges and bullets." (One of the muskets is on exhibit today at Kenmore.)

By this time, Lewis's health was failing, probably because of a respiratory ailment. He claimed that the commonwealth of Virginia owed him about 35,000 pounds, equivalent to more than $2 million today.

"I have destroyed myself greatly," Lewis wrote to Col. George Brooke, treasurer of Virginia, in February 1781. Shortly after, to be in what he surmised was purer air, Lewis retired to a family estate near Old Chapel, in today's Clarke County. He died at an unknown date and was interred in an unidentified place.

Despite postwar appeals by friends to the House of Delegates and Gov. Patrick Henry, the Lewis family was never compensated for Fielding's enormous advances of energy and money in the cause of the American Revolution. Lewis's children, in need of money, sold Kenmore in 1797.

After many changes of ownership and divisions of acreage, Kenmore was slated for destruction or division into apartments in 1921. But Fredericksburg's Vivian Minor Fleming decided that Kenmore had to be saved. Visitors began touring the mansion.

She and a friend, Annie Fleming-Smith, wrote scores of letters every day appealing for contributions. The first to donate was Col. I.N. Lewis, a collateral descendant of Fielding Lewis's. The mansion's owners, Elmer G. and Laura Heflin, impressed with the ladies' zeal, contributed $2,000.

On the first day of 1925, the Kenmore Association (now George Washington's Fredericksburg Foundation) paid the Heflins $30,000 for the property.