History of the Turnpike

In the late 18th century, there were two roads over the Shenandoah Mountains between Alexandria and Winchester, crossing the Shenandoahs at Snickers Gap (now along State Route 7) and Keyes Gap (State Route 9). The Virginia General Assembly, in 1785, passed a law appointing nine commissioners (a non-profit turnpike trust) and instructing them "to erect, or cause to be set up and erected, one or more gates or turnpikes across the roads, or any of them, leading into the town of Alexandria from Snigger's [Snickers] and Vesta's [Keyes] Gaps".

This was not the first law authorizing a toll road in the United States, but was the first recorded turnpike in operation, opening by the end of 1786. Thomas Jefferson, who was at least a moral backer of the enterprise, pronounced it a success. A 1793 for sale advertisement referred to one of the two roads as "the Turnpike Road, down which all the wheat, from an extensive and fertile Country, intended for the Alexandria Market, is conveyed".

However, the lack of maintenance caused by low tolls led to the wearing out of the southern route. The Little River Turnpike, a private corporation chartered in 1802, realigned and improved the portion between Alexandria and Aldie. A similar charter for the northern route east of Leesburg was assigned to the Leesburg Turnpike in 1809, and in 1810 the Snicker's Gap Turnpike Company obtained a charter for the road from Aldie northwest over Snickers Gap and beyond to the Shenandoah River at Snicker's Ferry. (The Berryville Turnpike later improved the road beyond the Shenandoah to Winchester.) When completed, the turnpike had three toll gates over a distance of about 17.5 miles.

The turnpike company continued to operate - at least over the gap - as late as 1915, and the road later became part of the state highway system - State Route 7 over the Shenandoah Mountains west of Bluemont, and secondary State Route 734 between Bluemont and Aldie.

over Beaverdam Creek (a tributary of Goose Creek). This turnpike replaced, in part, the first toll road in the United States, which consisted of two roads from Alexandria northwest into the Shenandoah Mountains. 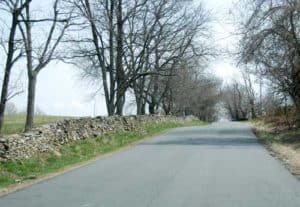 Views along the road

When the Iroquois hunted in the foothills of the Blue Ridge Mountains, they followed a trail that eventually became the roadbed for Route 734, the Snickersville Turnpike. Over the centuries, many names were given to this meandering byway that rises and falls across the lush Loudoun Valley. Land deeds from the early 1700s refer to it as the Shenandoah Hunting Path. From the late 1700s until the early 1800s it was called the Mountain Road. Still, at various points along the route, people found other names more suited to their purposes, such as the Blue Ridge Road, Colchester Road, the Middle Road and Snickers Gap Road.

By all its names, Snickersville Turnpike has been a setting of great significance to our nation's history. While still a land surveyor for Lord Fairfax, George Washington traveled this road over Snickers Gap and often spent the night along the Shenandoah River, where Edward Snickers kept an inn and operated a ferry. 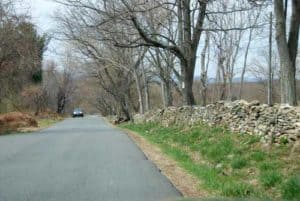 Increased commercial traffic in the early 1800s put an extra burden on the road, and during its 1809-10 General Assembly, the Commonwealth of Virginia created a system of privately owned toll-roads or "turnpikes", and appropriated $20,000 to build the 13.75 mile Snickersville Turnpike. As late as 1915, a toll booth was still in operation on top of the Blue Ridge at Snickers Gap.

Many Civil War skirmishes took place along the full length of the turnpike, where both Union and Confederate troops covered Snickers and Ashby's Gaps, while troops led by Robert E. Lee and "Fighting Joe" Hooker traveled up and down the Shenandoah Valley. Major General J.E.B. Stuart, Brigadier General Alfred Pleasonton, and John Mosby with his Rangers were prominent figures in Loudoun Valley's Civil War action.

The War took its toll on the turnpike. The Goose Creek Bridge was burned, and after the war, only the westernmost five miles were in a condition to merit payment for passage.