How Purcellville Came to Be Incorported in 1908

The history of Purcellville » 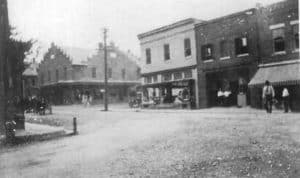 The town's incorporation proposal on the Virginia General Assembly docket for March 1908 was not exactly a new idea. Purcellville had been a village since the early 1820s, and its incorporation had been debated by the residents for decades.

Those opposing it argued that another level of government meant additional regulations imposed by council members, who might have been elected by only a few votes. The move also guaranteed additional taxes to pay a town sergeant and goodness knows what else.

People favoring incorporation pointed out that the village was split between two magisterial districts. North of Leesburg Pike, now Main Street, the village was in Jefferson District. South of the pike, it was in Mount Gilead District. It didn't make sense for people who lived across the street from one another to be represented by different county supervisors.

Loudoun judges had created the unnatural district boundary in 1870, when Purcellville had few people and the anomaly was of little concern. The village was then about the same size as it had been in 1862, when a New York Times correspondent attached to the invading Union army described the hamlet as "a few straggling houses on the Winchester and Leesburgh Turnpike."

That image changed radically, however, when the Washington &amp; Ohio Railroad (whose bed is now the W&amp;OD trail) reached Purcellville in March 1874. Five new businesses by the tracks led the Leesburg Mirror newspaper to describe a "town . . . springing up as it were overnight."

The boomtown atmosphere, which the Mirror likened to frontier railroad towns out West, stayed with the village through the next several decades -- mainly because of its location, dead center in the rich agricultural heartland of the Loudoun Valley. There were no restrictions on what one could sell, and opponents of incorporation wanted to keep that frontier reputation intact.

By 1908, there were about 30 businesses and more than 100 frame structures on the village's three downtown blocks, including the National Bank, the railroad station, the post office and a hotel. All of these buildings were within 600 feet of the spot where six unpaved roads, teeming with pedestrian, animal and vehicle traffic, converged. Locals dubbed the intersection Polecat Hollow. Worn by wagon wheels, the roads became a quagmire in wet weather.

A further burden on the streets and the traffic came during the August week when Purcellville hosted "Bush Meeting," an annual gathering of speakers, entertainers and evangelists that drew thousands of people. The event was inside the Tabernacle, which seated 3,000 and was the largest building in Loudoun County. (Today the building, off Nursery Avenue, is used by Purcellville Baptist Church.) The railroad ran special trains to carry visitors from Washington, and they had to ride or walk to the meeting grounds through Polecat Hollow, a mix of mud and manure.

This was another argument for incorporation, which could generate the tax revenue to pay for better roads.

"The need of improvement in the streets and sidewalks of town is urgent," said the March 14, 1908, General Assembly minutes on the incorporation's approval. The cure was to dump rocks -- little ones atop big ones -- on Leesburg Pike and other main streets, then line the street sides with logs to keep the rocks in place.

The six-member Town Council was appointed before the incorporation, by state Del. Fenton M. Love, a farmer living a few miles from Purcellville. The council members then chose three town officers. All nine officials were elected by voters in June 1908.

The three officers included Mayor Eugene Monroe, whose legacy is today's wide Main Street. He had experienced the traffic tie-ups on Leesburg's narrow downtown streets. Jacob Cornwell, always called "J.T.," was town sergeant and, when not occupied with constabulary duties, a grocer and butcher. Edwin T. Hirst, known as "E.T.," was the town recorder. Hirst owned and operated the town's largest general store.

But it was from storekeeper Valentine Vernon Purcell that the town drew its name. Purcell's Store had been the village's first post office, and Purcell had been appointed postmaster in 1822. One of his descendants, Patience Adelaide Purcell, shook a finger at me several years ago while instructing me on the correct pronunciation of the family name. "It's PURcell," she said, emphatically accenting the first syllable. "PurCELL is a French affectation."

Solving the problem of a town straddling magisterial districts was the first item on the council's agenda when it met March 25, 1908. It petitioned the county circuit court to place the entire town within the Mount Gilead District. The court concurred.

At the council's next meeting, on April 2, dogs and hogs were the order of business. Canines, the scourge of farmers as they often attacked sheep and calves, were taxed a dollar a year, with $2 for unspayed ones. Hogs were to be penned no closer than 200 yards from a residence, unless it was the home of the animals' owner. The council did not specify a fine.

Then, the inevitable: "Upon every male inhabitant who has attained the age of twenty-one, there shall be a [yearly] tax of fifty cents." The council also imposed a personal property tax of 11 cents on every $100 of assessed valuation -- then about a third of the property's true value. Taxes remained the same until April 1921, when they nearly tripled.

A local entrepreneur, J.N. "Nick" Hampton, was relieved at the low tax rate. His two contributions to celebrate the new town of Purcellville were completed in 1908. One was Hampton's Hall, an unusual concrete edifice with a roofline resembling a flight of stairs topped by spherical structures. It was built as a town hall with a large meeting room upstairs and a post office. Since 1927, the structure has been a restaurant called the White Palace.Hampton's second new building was a large livery stable, which suggests that he did not think a growing phenomenon known as the motor car would last. Although 1908 was when a Michigan company called Ford came out with "the people's car," Hampton probably noticed that only one of Purcellville's 350 residents owned an automobile.

He deserves our thanks now, for his anachronism is the finest example of a public livery stable in Loudoun County. The rear still sports its large carriage door, tall enough so that a stagecoach could enter the building. Rentals of horses and carriages lasted until 1926, a year before the last stagecoach rolled off the assembly line. Soon after, the structure became a storehouse for Nichols Hardware, which remains its use today.

Town wags say Hampton kept the stable operating past its heyday because a day-and-night card game held sway upstairs -- a throwback to those frontier days.

Further reading: A Medieval Virginia Town, 1914-1919, by Asa Moore Janney and Werner Janney (1986); Down at the Station: Purcellville and the W&OD Railroad, by Loudoun Valley High School students, edited by Richard Gillespie (1999); The Story of Purcellville, second edition, by Eugene Scheel (1983); and In the Watchfires: the Loudoun County Emancipation Association, 1890-1971, by Elaine Thompson (2005).