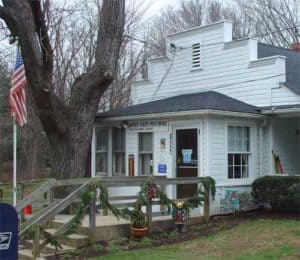 In all of Loudoun County, there is just one small road sign pointing to Paeonian Springs. That sign on the westbound side of Route 9, a few miles west of Leesburg, shows the way to a village that isn't all that different from the way it was at the turn of the century, although the Washington & Old Dominion railroad no longer makes eight stops a day there on its way to and from Washington. With its restored Victorian houses, country cottages, gravel roads and open spaces, the hamlet looks much as it did when it was a summer retreat for heat-weary city dwellers.

The development of Paeonian Springs began in 1871 with the arrival of the Washington & Ohio Railroad, which later became the Washington & Old Dominion. In 1890, a group of local developers placed advertisements publicizing a new resort town near the Blue Ridge Mountains. The new town's selling points, according to the ads, included a spring with excellent water, mountain air and magnificent scenery. Its name, Paeonian Springs, was derived from the gods of medicine in ancient Greek mythology and was meant to reflect the reputed medicinal value of the area's spring water. The rail line was an important part of Paeonian Springs life in the first half of the century.

The railroad brought Washingtonians out to escape the heat and disease of summer in the District. The spring water became a booming industry for the area. It sold for a dime a gallon at the spring house, and was bottled and shipped daily via rail to Washington for use by lawmakers in Congress. By 1901 there were three hotels, or boarding houses, a downtown section that extended from the train depot, and a village green. By 1912, a boardwalk linked the depot with the post office, a confectionery store, a mill, a blacksmith shop, a wheelwright shop and a staples store.The village also included the Catoctin Free Church, formed by 11 people dismissed from the Leesburg Presbyterian Church, as well as two private schools. The area began its decline in the 1920s. The boardwalk nearly completely decayed. In 1929 the mill burned down and the church was lost to a hurricane. The Pure Food and Drug Act made it difficult to make health claims about the spring water. The discovery of antibiotics meant it was no longer necessary to flee the city for health reasons during the summer months. The local schools were absorbed into the public school system and rail usage began its decline with the increase in the popularity of the automobile.