For Civil War enthusiasts, one living tree in the Virginia Piedmont — the "Mosby walnut"— stands out from all the others. Onto one of its far-reaching branches the famed Confederate partisan ranger John Singleton Mosby climbed from a bedroom window and, for a half-hour, balanced himself while a Union cavalry contingent searched the house.

Virgil Carrington "Pat" Jones first put the story in print in his 1944 classic, "Ranger Mosby." He had heard the tale from Mosby's daughter, Stuart Mosby Coleman, whom he interviewed at her Warrenton home. After their conversation about the event, Coleman gave Jones a letter from Mosby to his wife, Pauline. The letter, now in the Front Royal Confederate Memorial Museum, told how Mosby happened to be out on that limb.

The letter — datelined March 16, 1863, "near Middleburg" — illustrates Mosby the publicist. His latest raid had occurred a week earlier: Penetrating Union lines at Fairfax Courthouse in the dark of early morning, Mosby and 29 men captured Union Brig. Gen. Edwin Stoughton, two captains, 30 enlisted men and more than 50 horses without firing a shot. Undetected, the marauders then rode to Warrenton with their take.

"I send you two newspapers containing accounts of my late affair," Mosby wrote to his wife, Pauline. "I also want you to show the papers to Genl. [J.E.B.] Stuart — I enclose you $50. Come on immediately. Buy me up some Richmond papers containing Genl. Stuart's order & anything with reference to my recent foray." 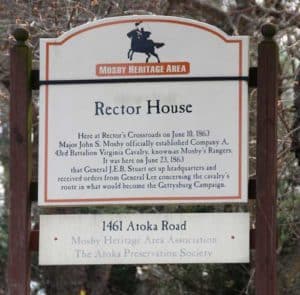 The letter then outlined that his wife, at Culpeper Court House, would be escorted by Sgt. Maj. Harry Hatcher to the home of James and Elizabeth Hathaway, "a very nice place about four miles from White Plains [now The Plains]. . . . I will meet you there."

The Hathaways had named their stuccoed brick home Western View for its vista of the Blue Ridge. The house was just a few years old, built in the then-fashionable Greek Revival style. Forty feet to the home's northeast stood a huge black walnut tree, more than a century old. After the war, old-timers recalled that its bark provided dye for Confederate uniforms and that its nuts fed soldiers.

James Hathaway was a prosperous farmer who sold agricultural equipment in the Landmark area southeast of Middleburg. He and Elizabeth had four young children at home. Then as today, Western View was on an isolated dirt road -- an unlikely spot, thought Mosby, for a visit by a Union raiding party. Had Mosby been in the area more than 2 1/2 months, he might have known that James Hathaway was frequently bantered about as an important personage in upper Fauquier County -- a man with an imposing and stylish new home. Officers on both sides often stayed in such edifices. Someone disclosed where Hathaway lived to a contingent of the 1st New York cavalry, led by Capt. William H. Boyd.

(It's worth noting here that, in describing the Union foray at Western View, Jones's informants -- Stuart Coleman and her siblings Pauline and Beverly -- either provided vivid details or Jones took liberties of language that bordered on historical fiction -- evident in other episodes in his book.)

Jones described the Federals' entry thus: "Old Man Hathaway [he was 50] pulled back the door, lamp in hand, and faced the intruders. The Yankee captain pushed into the wide hallway. . . . Then began a careful search. . . . In an upstairs chamber he found a white-faced young woman in robe and nightdress, trying impatiently to calm the fears of two sleepy youngsters. Parts of a gray uniform lay near the bed, rumpled, but neither the owner nor his boots could be located."

The Mosby children May and Beverly were then toddlers. Would they have been taken into a war zone? Would a fastidious officer such as Mosby have left his uniform lying around?

Describing the Union party's departure, Jones wrote: "The command to ride on was given. At that moment the agile Mosby swung lightly from the limb of the tree to his bedroom window, pulled himself through and felt for the bed in the dark."

That black walnut limb is no longer there, but its scar is. Jimmy Young, whose family has owned Western View since 1937, told me some weeks ago that as a boy he crawled out onto the limb's replacement. That member, too, survives only as a knot on the massive trunk. Onlookers today can see a third sturdy limb, again nearly touching that bedroom.

The onlookers have been steadily visiting since the 1940s. In 1981, when James Moyer took a busload out from Fairfax County to view the tree, among the group were Adm. Beverly Mosby Coleman, Stuart's son, and an elderly female descendant of the Hathaways. Both related their parents' telling them of Mosby's escape.

In August 1981, Fairfax County forester Richard Salzer measured the Mosby walnut. The trunk at 4 1/2 feet above the ground measured 15 feet around. Its height was 87 feet, its spread 105 feet.

Jeff Kirwan, natural resources specialist at Virginia Tech, wrote to me last week to say that the Salzer measurement makes the Mosby walnut the seventh-largest black walnut tree in the commonwealth. The largest is in Colonial Williamsburg; the second largest is near Waterford in Loudoun County.

On one of my many visits to the Mosby walnut, Young told me that expenses to care for the tree — pruning, stabilizing and feeding it — cost more than the tax on his farm. To keep the upper limbs in place, Young has positioned adjustable steel cables that reach from one side of the spread to another. A lightning arrester grounds the cables. Young will not permit coring to determine the hardwood's age.

Today's typical nuts are small and inedible. But every once in a while, down drops a reminder of yesterday. Young has planted several, but none has taken root. "After all," he told me, "the tree is in its dotage."