Loudoun County Towns and Villages in 1908

Taken from the book by James W. Head, History and Comprehensive Description of Loudoun County, Virginia, published by Park View Press in 1908.

Ashburn, a railway town in lower Loudoun, formerly known as Farmwell is 34 miles from Washington, 31 miles from Alexandria, 4 miles northwest of Sterling, and 6 miles Leesburg. It is in the heart of one of the richest and most extensive dairying sections of the State, and has become somewhat famous as a resort for anglers, the bass fishing in Goose Creek, near by, being eminently satisfying and attracting many devotees of the sport from Washington and other more distant points.

Bluemont, formerly known as Snickersville, is an attractive village, snugly and advantageously situated at the southeastern base of the Blue Ridge Mountains, about 3 miles from Round Hill, 54 miles by rail from Washington, and 165 miles from Richmond. It is on the western edge of the most densely populated section of Loudoun, and boasts modern hotels and boarding houses, two liveries, a grain elevator, and many handsome dwellings. Two turnpikes, leading from Washington and Alexandria to Winchester, intersect at this point. Bluemont is a popular summer resort, and lies within a very short distance of both the "Bears" Den" and "Raven Rocks," jutting points on the western slope of the Blue Ridge, from which magnificent views may be had of the Shenandoah valley and river and the Allegheny and North mountains. The town his a population of 200, 14 of which number are merchants and mechanics.

Leesburg, a fine old town, the county-seat of Loudoun, lies at the eastern base of Catoctin Mountain, 2.5 miles from the Potomac River at Balls Bluff, and 3 7/8 miles west of Goose Creek. It is in the northern part of the County, 40 miles northwest of Washington, 132 miles in a like direction from Richmond, the State capital, within a few miles of the picturesque Blue Ridge Mountains and the celebrated Valley of Virginia, 12 miles from Point of Rocks, Md., and about 22 miles from historic Harpers Ferry, W. Va. It occupies a high and healthy plain, the environs of which are waving and well cultivated and delightfully variegated by hill and dale.

The town derives its name from the Lees, who were among the early settlers of the County, and was established by act of the General Assembly, in September, 1758, in the thirty-second year of the reign of George II. Nicholas Minor, who owned sixty acres of land about the court-house, had subdivided this tract and some of the lots had been built upon prior to the passage of the act. This instrument constituted "the Hon. Philip Ludwell Lee, Esq., Thomas Mason, Esq., Francis Light Lee (father of 'Light Horse Harry' of subsequent Revolutionary fame), James Hamilton, Nicholas Minor, Josias Clapham, AEneas Campbell, John Hugh, Francis Hague, and William West," gentlemen, trustees for the newly established town. Prior to its establishment it had borne the name Georgetown, bestowed in honor of the then reigning English monarch.

14 In its birth and infancy the town was destined to win renown, for it was first founded as a fort or outpost of the then struggling colony of Virginia, as its narrow streets and close little red brick houses still testify, and for many years was the most westerly post of the colony. At one time the entire town was enclosed by stockades.

"Following its establishment the little fort became the principal outfitting post for the British and colonial forces the French and Indian war. Tradition still fondly points to the stone house, famous as the headquarters of General Braddock, who, it is claimed, passed through the place on his last fatal march to the wilderness; but in the light of thorough investigation this claim is found to be unsubstantiated. While a division of his army, under command of the eccentric old Sir Peter Halkett, did undoubtedly spend the night at the plantation of Nicholas Minor, the principal founder of the town, General Braddock is found to have gone in another direction."

Leesburg is governed by a mayor and common council and had at the time of the last government census (1900) a population of 1,513. An unusual percentage of its people are well educated, and all proverbially hospitable.

The houses, many of which are of brick and stone construction, are built in a compact and substantial manner. In the town and its environs are many of the most palatial residences to be seen in Virginia. There are several well-kept public roads leading from the town to the surrounding country seats and stock farms, nearly all of which are modernized reminders of the old plantation days.

With an elevation less than most points in the County, Leesburg, nevertheless, shares with them the distinction of being unsurpassed for healthfulness and picturesqueness of surroundings.

Crossing at right angles, its streets are regular and spacious an lighted by electricity. Many of its dwellings and business houses are also equipped with electric lighting facilities, power for which is generated at a plant located near Belmont, on Goose Creek, and controlled by Leesburg capitalists. In almost every quarter of the town are brick and granolithic sidewalks, fringed with the usual varieties of shade trees.

Some of the municipal advantages not already enumerated area sewerage system, a fire department, a public library, police protection and a thoroughly modern system of water-works of a capacity sufficient to supply the entire corporation with absolutely pure water from a noted spring issuing near the base of Catoctin Mountain.

Some of the public buildings are a town hall, one of the largest brick edifices in Northern Virginia; a comparatively new court-house and a clerk's office,15 both venerable structures with imposing facades lending them an exquisite air of Colonialism, the two liberally disposed over a fenced area with sloping lawns and umbrageous shade; a brick jail (County) containing eight steel cells, commodious residential quarters for the jailor and his family and having, as an humanitarian feature, a sunny court with towering walls; a remodeled brick academy and a colored school, both comprising primary, intermediate, and high school divisions, and provided with ample educational facilities and extensive playgrounds.

The town has 7 churches representing all the leading denominations, a Young Men's Christian Association branch, 5 fraternal orders and a weekly newspaper. Eight trains arrive at and depart from Leesburg daily.

Leesburg probably has more than the usual number of resident physicians, lawyers, and mechanics to be found in towns of a corresponding size.

Hamilton, one of the prettiest towns in the County, is spread over a considerable area and occupies one of the highest points in the beautiful Loudoun Valley. It is about 46 miles by rail from Washington, 3 miles from Purcellville and only a few miles from both the,Catoctin and Blue Ridge mountains, walling the valley to the east and west, and is the center of a group of seven towns and villages within a radius of 5 miles. It has 364 inhabitants, of which number 48 are merchants and mechanics.

Middleburg, situated on Goose Creek in the southwestern part of Loudoun, is 12 miles from the summit of the Blue Ridge at Ashby's Gap, 5 miles west of Aldie, 1/4 of mile from the Fauquier line, and 16 miles by stage from Leesburg the seat of government. It is a growing and prosperous community, elevated and airy and overlooking a broad expanse of rich territory. Fourteen of its 296 inhabitants are merchants and mechanics.

Purcellville, in the western part of the County with an approximate elevation of 500 feet, is about 50 miles from Washington, 3 miles from both Round Hill and Hamilton 2 1/2 miles from Lincoln, It is delightfully situated in the center of one of the finest agricultural districts in the Loudoun Valley and has a population of 300, 47 merchants and mechanics and a national bank. 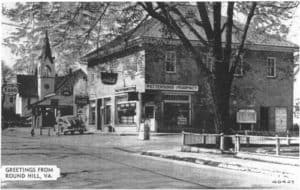 Round Hill, a thriving railway town in the western part of the County, lies 3 miles east of Bluemont, 3 miles west of Purcellville, and 53 miles from the city of Washington. It is the second largest town in Loudoun, has an elevation of about 600 feet above mean tide and is in the midst of a rich farming region abounding with streams of pure water from mountain water-courses. The town's name is derived from a conical hill projecting from the base of the Blue Ridge Mountains, 2 miles away. It has a population of 450, 20 of which number are merchants and mechanics, and a newly established bank.

Waterford, a thriving Quaker settlement, is situated on Catoctin Creek in the northern part of the County, 6 miles south of Taylorstown, 7 miles northwest of Leesburg, 47 miles in a like direction from Washington and 159 miles north of Richmond. It was named after the town of Waterford, in Ireland,where some of its founders had formerly resided. The first house within the town limits was built by one Asa Moore, and remains standing at the present day. In common with the other towns and villages of the famous Loudoun Valley, Waterford is noted for its numerous and inexhaustible wells of the purest and best water, bracing air and low mortality rate. It has 383 inhabitants, 44 of whom are merchants and mechanics.

Other towns, post villages and settlements in the County are: