The Development of the Telephone in Loudoun County 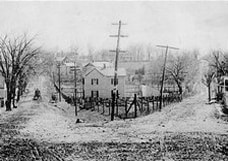 The first telephone lines in Northern Virginia are believed to have been built shortly after Alexander Graham Bell's invention was exhibited for the first time at the Philadelphia Centennial Exposition in June 1876.

Dorastus Cone, a wealthy mill owner in Riverton (now part of Front Royal) in Warren County, ran a quarter-mile line from Lackawanna, his grand home (today a bed-and-breakfast) across the South Fork of the Shenandoah River to his Riverton Mills on the south shore. The Warren Sentinel newspaper noted that Cone had "installed an Electric telephone."

The first known lines in the northern Piedmont linked many of its major towns in 1885-86. By the spring of 1885, poles of Loudoun & Fauquier Telephone Co., which had its headquarters in Middleburg, lined the town's Washington Street. By May, the wires had been extended to The Plains and by July to Leesburg and Warrenton. Stock in L&F sold for $25 a share (almost a man's average monthly salary). The initial stock offering was for $4,000.

At the same time, Landmark and Middleburg Telephone Co. had a more modest aim, to link the two communities, three miles apart. Stock in L&M sold for $10, and the line was estimated to cost $500, the amount of stock to be sold.

The Rev. Arthur S. Johns of Middleburg's Emmanuel Episcopal Church was the president of both phone companies. Some wags said a clergyman was chosen to keep the companies honest; others said the lines needed a lot of prayer to operate efficiently.

In western Loudoun, Virginia and Maryland Telephone Co. linked Lincoln and Purcellville to Lovettsville and Berlin (today's Brunswick) by January 1886. By May, lines extended from Lincoln to Unison, the Silcott Springs resort and Philomont.

In 1976, I interviewed 100-year-old Charles Elbert Compher who, with his father, John W. Compher, saw the telephone poles and wires going up along Berlin Turnpike near Lovettsville. Charles remembered his dad's words, "I don't believe it will succeed."

To the south, the first known telephone line linking the Piedmont with a major eastern city, Alexandria, was spearheaded by William Beverley, owner of the six-story stone grist mill on Broad Run at the Fauquier-Prince William border. Alexandria was the destination for much of the mill's ground corn and wheat.

The Warrenton, Plains, Alexandria Telephone Co. affixed its lines from the mill to The Plains and Alexandria to telegraph poles lining the Manassas Gap branch of the Virginia Midland Railroad. By the end of 1886, Warrenton residents could also telephone Upperville via Fauquier and Upperville Telephone Co. lines.

There were no phone numbers for subscribers to these early lines. You cranked the instrument, which was a long, wooden box with a stationary metal mouthpiece, a movable earpiece affixed to a wall and an exposed bell or two. When you picked up the receiver, the operator came on the line, and she rang your party.

If the operator knew that the party being called was not home, she would so inform the caller. This courtesy continued into the 1930s, when dialed telephone numbers had replaced most crank phones and their well-informed operators.

A May 1902 flier sent to subscribers of Old Dominion Telephone Co., which had its headquarters in Waterford, advertised a change in rates. Customers could purchase a phone for $7.50 or rent one for $2.50 a year. The flier emphasized that subscribers "have the privilege only for their immediate families, and not to be extended to other persons who have not bought the privilege, except on payment of a 10-cent fee."

Old Dominion President Decatur Vandeventer warned subscribers that continued violations of this nature would "forfeit the right of the private renter and cause his line to be severed."

By the first decade of the 20th century, phone numbers had replaced the operator's voice. Each subscriber had a distinctive set of short or long rings. A central operator would hear the rings and plug the caller into the proper outlet. To reassure the caller, some operators would come on the line and say, "I'll plug you in."

When there were difficulties in connecting, especially in bad weather, the central operator would say something like, "There's trouble on the line."

Early directories, even through the 1940s, warned subscribers not to use the phone during thunderstorms, specifically stating that it was "dangerous."

The various sets of rings were published in directories. The oldest area directory I've seen dates from about 1910. It is one printed page with "Rules for Phone-Operators" of the Manassas and Dumfries Telephone Co. in Kopp, a small village in southern Prince William County. Each of the company's 60 subscribers had their numbers listed by a series of two to five dots and dashes, similar to the Morse code. Eighteen subscribers chose not to have their names published in the directory. Their dots and dashes were listed without names next to them.

Among the phone company's rules: "No one shall be entitled to use the line for more than five consecutive minutes. Any one through curiosity listening to conversation over the line, is respectfully requested to keep the battery [to amplify sound] shut off, otherwise those using the line will be disturbed. No improper language will be allowed over the line."

Violators were fined $1 (the average daily wage), "and for second offense the matter should be brought before a committee of three members of the company."

The committee had the power to "debar the offender from use of the line" and to levy a $2 fine.

The rules also specified that a non-subscriber had "no right to use the line free of charge" and had to pay 10 cents to the subscriber to use the phone. The dime, even though it was rightfully the phone company's, was sometimes pocketed by subscribers. The phone company suspected the filching but generally ignored it. The company knew that a subscriber's extra cash was an incentive to get more people to join the line.

Storekeepers were among the first ready users of phone lines, not only to take orders but to entice people into the store by letting them use the phone. In Watson, a predominantly black village between Leesburg and Aldie, Will Mitchell installed a store phone in 1907 and charged a monthly fee of 50 cents to non-subscribers. People felt indebted to Mitchell for the privilege, and his business prospered. The store is still going strong under Mitchell's successors, the Church family. They'll let you use the phone for free.

Everyone on the line could hear the long and short rings, and if you picked up the receiver carefully, you could listen to any conversation. Thus, people often spoke in code. During the Prohibition era in Virginia, 1916-33, a favorite ruse to obtain liquor was to call a bootlegger and ask him to bring a bottle of milk, telling him you were feeling under the weather and couldn't make it to the store.

As subscribers increased in the Piedmont, most of the old phone companies were bought by Chesapeake & Potomac Telephone Co. Through the 1930s, C&P began replacing the dots and dashes and operator-assisted calls with dial phones and numbers. When the numerals ran out, a letter was added. Through the early 1950s there were never more than four numbers and one letter for a phone number.

The Leesburg and Warrenton exchanges even had one- and two-digit phone numbers. Leesburg's number 1 was held by Mrs. John A. Gibson, wife of the town's prominent physician and co-founder of the Loudoun Hospital. Dr. Gibson didn't bother to have a phone listing, not even under physicians in the business pages. The town's number 2 was held by George R. Hughes, who drove a taxi. Warrenton's number 1 was held by the Rev. Guy C. Heyl, pastor of Warrenton Baptist Church. The commissioner of revenue held number 2.

Some luminaries didn't mind having their phones listed. One could dial 4 on the Leesburg exchange and speak with Gen. George C. Marshall, listed as Gen. G.C. Marshall. Number 80 on the Upperville exchange belonged to financier and philanthropist Paul Mellon.

Phone subscribers paid a monthly fee of about $5, but their local calling district was limited. Subscribers in Warrenton, Leesburg and Upperville, for instance, could dial only their exchanges, which reached a few miles from town. A call to The Plains from Warrenton or to Purcellville from Leesburg would add five cents to the monthly bill.

If you had a two-party line, the fee was often $2 a month and decreased proportionally for a four-party line or eight-party line -- a blessing to many during the Depression. Listeners on party lines tended to be good neighbors or relatives, for anyone on the line could pick up the receiver and listen to the call and even speak to the caller. C&P slowly realized that to some people "conference calls" were a plus, and the company began discouraging party lines by raising rates on such lines after World War II.

Charles Fishback, who grew up listening to an eight-party line on the Old Waterford Road in the 1950s, graduated to a four-party line in Paeonian Springs in the 1960s. He worked for C&P for many years and guessed that the final years of party lines in the Piedmont were in the mid-1970s.

The combination Loudoun and Fauquier directories of the 1930s through the early 1950s featured Mercury on the cover, the Greek god of commerce, cleverness and travel. The nude figure has telephone cables wrapped around his middle, and he holds three lightning bolts in his raised right hand. He is standing on a globe, and scrolled across the equator are the words "Spirit of Communications."

According to the directories, a long-distance call from Leesburg to Washington cost 30 cents and to Baltimore, the leading farm-supply city and stockyards for local cattle, 40 cents. A Warrenton-to-Baltimore call cost 50 cents.

Overseas calls cost more than a person's average weekly salary. The directories listed a daytime call from Leesburg or Warrenton to London or Paris at $21. The nighttime and weekend rate was $15. Bermuda must have been a popular vacation spot, for it also appeared in the long-distance rate table -- $17.50 for a call any time.

Directories also included phone manners: "It saves you time to say, 'This is Mr. Blank,' or 'This is the Blank Store, Mr. Blank speaking,' rather than answer 'hello.' "

However, in an era when the proper hostess left her calling card and message at the recipient's front door, Emily Post would have questioned this piece of advice: "Whether it's for dinner, a dance, afternoon tea or bridge, the modern hostess uses her telephone to extend her invitations."

And as to why those old directories are among historical rarities, each edition carried the words: "We ask that it be destroyed when a later one is issued."