This engraving shows the town of Leesburg, sixteen years prior to the Civil War. Leesburg was, and is, a part of Loudoun County, Virginia , and is only forty miles from Washington. It was originally established in September 1758, as an outpost fort for the early Virginia colonies. By 1900, Leesburg was still a small town in Virginia and only had 1,513 people living there.

Although it did not become the site of a major battle, the town of Leesburg, and its surrounding country, occupied a place of major strategic importance in the Eastern theater of operations. The town sat at the junction of two main highways connecting Alexandria and Washington , with controlling passes in the Blue Ridge and it’s foothills. It was the northern terminus of the Alexandria, Loudoun and Hampshire Railroad, later known as the Washington and Old Dominion RR. (The right of way survives to the present day and is now a jogging and biking path).

This engraving shows the town of Leesburg, sixteen years prior to the Civil War. Leesburg was, and is, a part of Loudoun County, Virginia , and is only forty miles from Washington. It was originally established in September 1758, as an outpost fort for the early Virginia colonies. By 1900, Leesburg was still a small town in Virginia and only had 1,513 people living there.

The town also covered the main Potomac fords between the Baltimore and Ohio RR at Point of Rocks (Maryland), and at Great Falls (near present day Ashburn). In sum, it controlled the communications and supply routes of a large segment of northeastern Virginia, and that between Virginia and Maryland.

The town could have been a decisive factor in the first major conflict of the War; in fact, its importance was recognized by one of the Union generals. Had his foresight been acted upon, the Union disaster at the battle of First Manassas may well have been a victory, and may have dramatically put a quick end to the war.Early in the war, to prevent invasion, Thomas J. Jackson's Confederate troops burned Potomac bridges, including this one at Harper's Ferry

In June 1861, two Confederate and two Union armies were in the field in the East. One Confederate force, commanded by Major General P. G. T. Beauregard, lay between Washington DC and the important railway junction at Manassas. The other Confederate army under Major General Joseph E. Johnston occupied the strategic site of Harpers Ferry where the Shenandoah and the Potomac converge, and the approaches to the Shenandoah Valley. 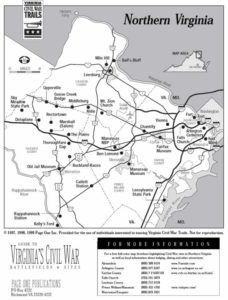 Map of Loudoun County and its Civil War battles

The principal Union army, under the command of Brigadier General Irwin McDowell, was based in Washington DC, protecting the Federal government and capital, and with several optional routes to advance southward. The other Union army, commanded by Major General Robert Patterson, was concentrated near Hagerstown, MD with orders to contain Johnston in the Shenandoah Valley should McDowell advance towards Manassas.

In these arrangements the Union dispositions were as faults as those of the Confederates were sound. McDowell and Patterson were placed on exterior lines, in effect on the rim of a wheel, while Beauregard and Johnston held interior lines, working from the hub to the wheel. Beauregard and Johnston had complete freedom of actions; either could join the other at will and defeat Patterson or McDowell, then turn and throw their combined forces on the other.

Patterson recognized the inherent faults in this arrangement, and on June 21st wrote to Lt. General Winfield Scott, the Union supreme commander, suggesting that he move his base to Frederick, MD, and abandon the Valley line of operations, leaving a covering force at Harpers Ferry. He would then:

"… send everything else available -- horse, foot, and artillery, to cross the Potomac near Point of Rocks, and unite with Col. (Charles P.) Stone at Leesburg, From that point I can operate as circumstances demand and you orders require."