Invasion and occupation by Union forces had threatened Loudoun since the opening days of the war. In December, 1861, Brigadier General D. H. Hill replaced Brigadier General Nathan G. "Shanks" Evans as commander of the Confederate forces in the County. Hill, an outspoken North Carolinian, Presbyterian, former regular army officer, and brother-in-law of Stonewall Jackson, had become well known throughout the South as a result of the battle of Big Bethel in June.

While this was no more than a skirmish. Hill wrote a voluminous report detailing the action and extolling the bravery of his men. It was a Confederate victory and the South was quick to acclaim the man responsible for the victory. Hill was a competent officer and brought to Loudoun a good administration, and a skillful defense of this outpost.

The Confederates closely watched the Potomac River crossings as enemy forces gathered along the Maryland side and at Harpers Ferry. Finally, on February 24, 1862, Colonel John W. Geary started crossing his 28th Pennsylvania Infantry from Harpers Ferry into Virginia. 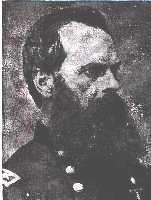 Colonel Geary was not a stranger to Loudoun, for as president of the Potomac Iron Company he had owned extensive mineral properties in the County. Geary's pre-war activities had been quite varied. He reported to General Scott at Vera Cruz as lieutenant-colonel of the 2nd Pennsylvania Volunteer Infantry, and commanded that regiment at Chapultepec, where he was wounded twice. His service won the approval of General Scott and he was made the first commander of that city and promoted colonel of his regiment. At the close of the war he went to California where he was made the first postmaster of San Francisco, and was authorized by President Polk to establish the postal service throughout the state. Mayor of San Francisco, judge, and a delegate to the state constitutional convention were honors conferred upon him by the people of California. He retired to his farm in Pennsylvania for a few years, and in 1856, was appointed governor of Kansas by President Pierce. Land speculations and farming occupied his time until 1861. At the outbreak of the Civil War he organized a regiment of 1,500 men, and joined General Banks at Harpers Ferry in July, 1861. 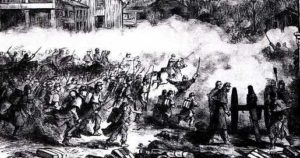 Middleburg was a hot-bed of civilian resistance when Union troops under Geary occupied Loudoun. An artist-correspondant recorded this scene in March 1862.

The crossings of the Potomac and Shenandoah rivers proved quite hazardous, as both rose just when Geary's movement started. The troops first attempted to cross by means of a rope ferry, but the skiffs capsized, causing the loss of six men. Larger boats were then used to put across five companies and two guns which immediately occupied Loudoun Heights. (Loudoun Heights overlook the Potomac at Harper's Ferry. Civil War earthworks still can be seen there by the dedicated hiker.) By the 27th, the remaining companies of the regiment supported by the other four guns of the battery and a squadron of the First Michigan Cavalry, crossed and pushed out from the river. On the following morning, the command marched to Lovettsville where they were greeted along the way "with enthusiastic demonstrations of joy and manifestations of Union feeling."

With headquarters established at Lovettsville, Geary dispatched a detachment of infantry with one gun to the crest of Short Hill Mountain to protect his flank, and then set up a line of battle against the constant attacks of the Confederates. He was now in a position to protect the Baltimore and Ohio Railroad against the raids which the Confederates had been making to interrupt rail service between Baltimore and the West.

From Washington and Alexandria, McClellan had started trans- porting his army by water in an "on to Richmond" movement, and Joseph E. Johnston, in command of the Confederate forces in Northern Virginia, started withdrawing from Manassas to meet this threat against the Confederate capital. With the parent organization gone, the outpost in Loudoun could not be held, so on March 6, General Hill was ordered to withdraw his forces, leaving only cavalry to impede pursuit by Geary.

On March 7, Geary's forces left Lovettsville and marched to Waterford via Wheatland, meeting and easily brushing aside small parties of Confederate cavalry. It had been the intention of the Confederates to bum Wheatland and Waterford as this was an area of intense Union feeling, but Geary's swift advance saved the villages from the flames. After resting in Waterford for a few hours, the advance pushed on toward Leesburg, where it took possession of Fort Johnston. With the capture of the fort, the United States flag was raised, and the name of the works changed to Fort Geary. Two guns were placed there to command Leesburg, and troops soon moved into the town.

In withdrawing. General Hill ordered the destruction of all forage, and the sight that greeted the Federals from the hills above the town was one of flames and dense smoke. Mills, barns, and haystacks were touched by the torch to prevent their contents from aiding the enemy. Bridges were destroyed to slow the pursuit.

In Leesburg, Geary took possession of the Court House, bank, and all public buildings, before sending detachments to occupy Fort Evans and Beauregard. Here the Federals did not receive the welcome that was evident in the northern part of the County, while some citizens took the oath of allegiance, many were hostile to the invader, and martial law was established. Paroles of honor were given to many of the leading citizens. Court records are saved »

Leaving a provost-marshal in Leesburg, and Fort Johnston being strongly held, Geary sent patrols to follow Hill's retreating forces as far as Carter's Mill (Oatlands). He found "their path blackened with devastation hurriedly committed, and that they burned the bridge over Goose Creek, impeding our further progress, as it was unfordable." Blocked in a southerly direction, he turned west to Snickersville and reconnoitered that section of the Blue Ridge Mountains.

The Federals occupied Upperville on March 15. They had now traversed the entire County from north to south, but small parties of Confederates still resisted the advance. The column then moved into Fauquier County only to return to Loudoun, at Aldie, a few days later. From there they moved to Snickersville again where they were joined by the detachment which had been left at Leesburg.

Orders were received to proceed to Fauquier County and repair the Manassas Gap Railroad, which had been destroyed by the retreating Confederates. Geary put his column in motion and marched through Philomont into Middleburg, where he remained two days in that in- tensely hostile town. In other towns sympathetic to the Southern cause, the reaction to the Union troops had been one of passive resistance. At Middleburg, the citizens quite openly displayed their feelings toward the invader, which caused Colonel Geary to report "the most violent secession feeling prevailed", and forced him to enlist the aid of several leading men of the town to preserve order.

Thus, for the first time, Loudoun was entirely in the hands of Federal troops. For the next three years its citizens were to see control constantly change, as armies and raiding parties crossed and recrossed the County.