Loudoun County Before the Europeans – Indians of the Virginia Piedmont

by Beth Chambers
This article appeared in the Waterfor Foundation's 1983 publication, Wateford Perspectives. Reprinted with the permission of the Waterford Foundation, Inc.

More on the Indians of Virginia 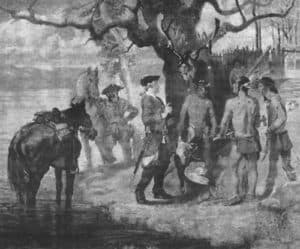 Meeting the Piscataway depicts the first settlers to explore the interior of Loudoun County in 1699. Painting by William Woodward.

The meandering Catoctin Creek has probably seen the passing of hunters and trappers for thousands of years. Projectile points typical of those used by Indians of the Archaic and Woodland cultures are occasionally found in Waterford's backyard gardens and farms. Isolated Paleoindian points from the upper Potomac indicate that human groups may have occupied the region as early as 10,000 years ago.

At the close of the glacial age, the newly temperate forests offered abundant resources for Archaic family groups whose semiNomadic way of life revolved around seasonal hunts and harvests over widely scattered areas. Camp sites in the Loudoun area, some as old as 5,000 - 6,000 years, are especially numerous along the banks and islands of the Potomac, where fishing was good and overland trails crossed the river. The Piedmont was a crossroads of travel and trade throughout antiquity. Point of Rocks was a favored crossing, as were the fords at Noland's Ferry and White's Ferry.

With the gradual development of Woodland village culture, ultimately oriented to the cultivation of domestic plants, population tended to concentrate in the tidewater region. There are few indications that piedmont Virginia was ever the home of sedentary, village-dwelling agriculturists. Most of this area was inhabited by Manahoac and Monacan peoples, eastern tribal groups of the Souian language family, who were estimated to number about 3,000 in 1608. They were said to have lived chiefly by the hunt and the seasonal harvest of wild berries and greens.

What is now Loudoun County lay within the northern periphery of the Manahoac territory, which extended as far north as the Potomac River, although apparently no permanent settlements were located here. Powhatan called the Manahoacs the "Anchanachuck", meaning "those that hunt in the mountains." The wooded hills and valleys of western Loudoun,. burned off periodically to sustain areas of grassy meadow, probably served as a hunting range for taking white-tail-deer, black bear, wild turkey, and other game.

Its streams supported beaver, otter, fish, and waterfowl, the latter highly prized for feathers. Beyond this, our knowledge of these peoples living above the falls of the rivers in the piedmont zone is extremely limited.

The Jamestown settlers considered the piedmont the territory of alien tribes, collectively called "the snake-like-ones" or "the enemies," some of whom "at the time of the falling of the leaf' came down from the hilly flanks of the Blue Ridge to invade Algonquin lands.

By the mid-seventeenth century, the economic and political ramifications of the fir trade, heightened by imperial rivalries between the French and English, had a substantial effect on settlement of the northern Virginia frontier. As early as 1622 the Iroquois trade network extended from New York as far south as the Potomac. Henry Fleet, one of the Potomac's more flamboyant fur traders, found the upriver beaver trade was regulated by the Necostin Indians, situated to advantage in the vicinity of present-day Washington where both overland and river traffic converged. The Necostin were protected in their position as middlemen, Fleet reports, "by the Massomacks or Cannyda Indians," apparently a reference to the Massawomeke, the Powhatan appellation for the Iroquois.

As the supply of beaver dwindled in upper New York State, hostilities among Iroquoian-speaking tribes intensified. In search of furs and influence, hunters and warriors of the Iroquois, particularly the Seneca, renewed attacks on the Conestoga of Pennsylvania and Maryland, and drove down on the Souian tribes of Virginia. The "Great Warrior's Path" crossed Frederick County, Maryland, following the east slope of the Catoctin Mountains. Crossing the Potomac River near the mouth of the Monocacy to near Lucketts, the path, later known as the Carolina Road, followed the approximate alignment of present Route 15 from Lucketts through Leesburg, and southward along Routes 621 and 625 to the Prince William line. It continued down through the Virginia piedmont, eventually reaching North Carolina.

This pressure from the Iroquoian tribes probably caused the dispersal of the Manahoacs before Euro-Americans entered the area. By 1670 the German explorer John Lederer found the region virtually abandoned. Intermittent raids by small parties of northern tribes were a serious threat in the piedmont for over half a century, despite a treaty of 1684 whereby the Iroquois agreed to "Keep at the Foot of the Mountain" when crossing the region.

Fears of inter-tribal hostilities were further aroused by the sudden arrival in 1697 of Conoy (or Piscataway) Indians from southern Maryland. The Conoy, who were farmers and fishermen, had been resettled from reservation to reservation in tidewater Maryland. They unexpectedly migrated to Virginia, and set up a fortified settlement in the Occoquan-Goose Creek valley. They were not persuaded to return to Maryland, but they did move to an outpost on the islands of the Potomac near Point of Rocks, Maryland.

In 1699 Virginia officials Giles Vandercastle and Burr Harrison traveled over old Indian trails up the Potomac to confer with the Conoy. According to their journal, the Conoy had built a palisaded village on Heater's Island, with eighteen houses inside the fortification, and nine houses around its perimeter. However, within a few years of the visit of Harrison and Vandercastle an outbreak of smallpox swept the village. Most of the survivors, now tributary to the Five Nations of the Iroquois, moved to lands assigned them on the Susquehanna River.

The final chapter in Loudoun's Indian history was concluded in 1722. In 1720 Governor Spotswood of Virginia initiated proposals for peace with the Five Nations, hoping to bring an end to their warfare with the southern tribes. It was also clear that a firm alliance with the Iroquois would provide a buffer between the French and the English of Maryland and Virginia. By the Treaty of Albany, ratified in 1722, neither the Iroquois and their allies, nor the Virginia tributary Indians or settlers were to cross the Potomac River or the Blue Ridge mountains - the established boundaries without the consent of the respective political authorities.

The treaty effectively ensured the safety of the Loudoun frontier-, within a decade the first German and Quaker immigrants began settling the fertile Catoctin valley, including the village of Waterford.