What would become known as the Old Carolina Road (present day U.S. Route 15) was a major route of travel between north and south for Native tribes. According to local historians, a pitched battle was fought near present Leesburg between the warring Catawba and Lenape tribes, neither of whom lived in the area.

European settlement of near Leesburg began in the late 1730s as tidewater planters moved into the area from the south and east establishing large farms and plantations. Many of the First Families of Virginia were among those to settle in the area including the Carters, Lees and Masons. The genesis of Leesburg occurred sometime before 1755 when Nicholas Minor acquired land around the intersection of the Old Carolina Road and the Potomac Ridge Road (present day Route 7) and established a tavern there. Despite lack of growth around the tavern, upon Loudoun's formation in 1757, Minor dubbed the sparse collection of buildings about his tavern "George Town" in honor of the reigning monarch of Great Britain.

Leesburg was pictured in less-than-alluring words. In 1774, diarist Nicholas Cresswell noted that it was "very indifferently built" and had "few inhabitants and little trade."

The village's prosperity changed the following year when the British Colonial Council ordered the establishment of the county Court House at the crossroads. Accordingly Minor had a town laid out on the traditional Virginia plan of six criss-cross streets. On October 12 of that year (1758) the Virginia General Assembly founded the town of Leesburg upon the 60 acres that Minor laid out. Leesburg was renamed to honor the influential Thomas Lee and not, as is popular belief, his son Francis Lightfoot Lee who lived in Loudoun and brought up the bill to establish Leesburg, nor as is sometimes thought, Robert E. Lee (his great-grandnephew).[7] Interestingly, when the post office was established in Leesburg in 1803 the branch was named "Leesburgh"; the 'h' persisted until 1894. 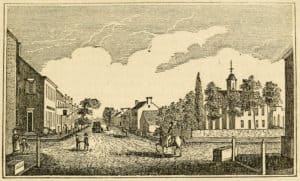 "Central View of Leesburg", an engraving from Henry Howe's Historical Collections of Virginia (1845)

By 1850, Leesburg had grown to 1,688 residents. From the earliest settlers, Leesburg's residents had included slaves. Unlike slaves in rural Loudoun County, Leesburg's slaves were often skilled artisans, worked in shops, or worked in their owner's homes. Mixed with the diversity of the religious and political opinions on slavery held by its white residents, Leesburg's relationship with the institution was complicated and sometimes contradictory. Many of Leesburg's Quakers, Methodists and Presbyterians were active in the Loudoun chapter of the American Colonization Society, which sought to send freed slaves to the new colony of Liberia, in Africa.