From the Department of the Interior Report, "Linking the Past to the Future, A Landscape Conservation Strategy for Waterford, Virginia", 1992 Read the report

In 1662 the Virginia Assembly had passed a road law which required each county to appoint surveyors to "...lay out the most convenient ways to Church, to the Court, to James Towne and from County to County." (Harrison, p. 446) However, improvements to existing trails and the development of new roads into the back country of Virginia were delayed until the withdrawal of Native Americans after the Treaty of Albany was signed in 1722. Once roads were established, they influenced subsequent development. The growth of Waterford as a village and market center for surrounding farms was directly related to its proximity to existing pathways.

The Shenandoah Hunting Path, later known as the Carolina Road and roughly parallel to the present day Rt. 15, was an existing Indian trail. It provided a natural conduit for settlers from Pennsylvania into Loudoun County.

The earliest grants of land in the Waterford area refer to paths between settlements, wagon roads, and bridges. "Settlements" often referred to homesteads rather than a collection of dwellings that could be construed as a village. Road cases and orders of the Loudoun County Court give more information on contemporary roads and landmarks. Unfortunately, most give no compass direction referring instead to existing roads, paths or landowners, and the specific locations are unclear.

Waterways, though not commercially navigable, were nevertheless important as the determining factor in subsequent settlement. In conjunction with topography, they determined the initial placement of development. Although there were a few bridges that are noted, the locations of fords were probably more important in determining the routes that developed.

One of several petitions for the construction of a bridge over the Catoctin at Waterford complained that the creek was "too deep to ford for several successive days" after a good rain. The petition c. 1830 indicates that "...Waterford is a point in the road leading from all the upper part of the German settlement to the county seat as well as from the neighborhood lying immediately west..." (Loudoun County Road Case # 31 1). This reference further implies that until the requested bridge was constructed in 1838-39, the only way of crossing the creek was a ford --water ford? Although, Thomas Moore

is generally credited with naming the village of Waterford after his hometown in Ireland, this is unsubstantiated. It is at least as likely that the village was named for the critical ford which crossed Catoctin Creek at the present location of the Mill bridge. The ford would have been an important feature as the village expanded over the terrace area adjoining Janney's Mill.

The development of east-west transportation routes led to the subsequent growth of Waterford as an intermediate point in the 19th century farm to market system linking the Shenandoah Valley and port cities of Alexandria and Georgetown. Traditional Indian paths were often improved by large plantation owners to allow them to carry their produce to the rivers. In Loudoun County, Snicker's Gap, along with Noland's Ferry and Ashby's Bent were the natural gateways from the north and west already traversed by trails of the Susquehannocks (Harrison, p. 441). These also became the paths of settlers to the Piedmont.

The earliest improvements of inland roads were for the use of hogsheads of tobacco pulled by cattle or horses to the nearest navigable water. These became the foundation for longer "rolling roads" to and beyond the Blue Ridge. Following the establishment of the port of Alexandria as a major market for wheat, the city managed to maintain dominance of the market with a system of roads through Fauquier and Loudoun Counties. The Alexandria Road to Vestal's Gap had been an Indian trail beginning on the ridge between Hunting Creek (now Alexandria) and Four Mile Run (Arlington), extending west over the Blue Ridge Mountains. It was later used as a rolling road crossing the South Fork of the Catoctin at a ford about two and a half miles north of Waterford where it forked to form a path to Gregory's Gap and north to join the Philadelphia Road beyond the Blue Ridge. The turnpike route from Winchester to Alexandria was the main trade route over which products were marketed, not just from western Loudoun County but from the Shenandoah Valley beyond.

Ox Road through Fairfax County was an Indian path improved by a "gang of sawyers" employed by Charles Carter to provide a way from his Frying Pan Mine in Loudoun County to Copper Mine Landing on the Occoquan around 1729 (Harrison, p. 423). The "Mountain Road" from Aldie to Snicker's Gap predates George Washington's days as a surveyor as he gives an account of being lost there (Harrison, p. 478). George Washington is said to have used the road through Hillsboro and Vestal's Gap (now roughly parallel to Route 9) "frequently", specifically on the expedition to Fort Duquesne in 1753 (Harrison, p. 481).

“ ... [L]and travelling in Virginia until after the middle of the eighteenth century was ... a matter of riding a horse." (Harrison, p. 445) In the eighteenth century only the wealthy had carriages, usually used by ladies; wealthy men might drive two-wheeled chaises. Nicholas Cresswell gives an account of a day-long journey between Alexandria and Leesburg in his journal:
" Sunday, November 27th, 1774. Got to Leesburg, 40 miles from Alexandria. The land begins to grow better. A Gravelly soil and produces good Wheat, but the roads are very bad, cut to pieces with the wagons, number of them we met today. Their method of mending the roads is with poles about 10 foot long laid across the road close together; they stick fast in the mud and make an excellent causeway. Very thinly peopled along the road, almost all Woods. (Cresswell, p. 47) 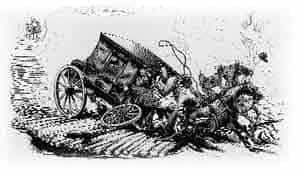 Plank roads were introduced from Canada in the 19th century, sometimes with jarring results.

According to Cresswell's journal, the trip from Leesburg to Philadelphia took four days, and from New York City to Leesburg by way of Philadelphia eight days. It should be kept in mind that these were the times for trips by stagecoach; a loaded wagon hauling goods to or from market took at least twice as long.

Because of the length and difficulty of travel, regional trade centers such as Waterford were a necessity. In describing trade patterns of the late eighteenth century, the editors of Israel Janney's account books in Goose Creek for the years 1787-89 note, "The store's watershed for customers stretched perhaps some ten miles away in a sort of semicircle that went west, north, and east, skipping the slaveholders just to the south" (Janney, p. iv). Indeed among the customers listed are several known residents of Waterford. Therefore, it follows that the residents of Goose Creek were as likely to look to Waterford as a trading neighbor.

While travel was slow even in good weather, it was next to impossible during bad weather. Rains made the roads slippery, and deep gullies cut into the mud caused the wheels to ride unevenly and overturn wagons. Heavy and drifting snow made travel by horseback next to impossible. Janney recounts an emergency journey to Washington during such a storm: "The people had not learned to "break" the roads at such times as they do in New England", and the journey took two days (J.J. Janney, p. 61).

Once off the turnpikes the location of existing farms and mills often determined the location of new roads and the revision of existing roads upon which the turnpikes were constructed. The road cases in the Loudoun County Clerk's office contain many petitions for roads from an existing mill to a new one, and the Court might order that a new road be cut to provide access to the mills. River crossings, too, were an important determining factor of the placement and destination of roads. So, even though the creeks and streams were not routes of transportation in the same sense as the Potomac or Occoquan, they determined the location of mills and available crossings and in so doing determined the overland routes developed for trade and settlement.

In 1896, the tolls were removed from the Little River and Leesburg Turnpikes, as they had been overshadowed for trade and transportation purposes by the railroad. The Washington and Western Railroad extended to Round Hill, and the mail stage connecting with the B & 0 Railroad at Point of Rocks provided a convenient link to Baltimore in the early 20th century (Reid, p. 3). A passenger car added to the early morning milk run on the Washington and Old Dominion Railroad stopped for waiting riders west of town to carry them into Leesburg (Reid, p. 17). By this time an "improved" or paved road was part of the county road system running from Waterford to Paeonian Springs (Sanders, p. 13).

In an article in the Loudoun Times-Mirror, the relatively rare commute from Leesburg to Washington was described as taking less than an hour and a half "Travelling well within the speed limits..." (Huntingdon). Anne Carter Smith remembers the trip as taking about an hour in 1936-37; "not much longer than today."

The first plans for the improvement of the Potomac for commercial navigation between Washington and points west were put forward before the Revolutionary War. Such a system was intended to provide inexpensive transportation for the wheat crops of the Shenandoah, Catoctin, and Monocacy valleys. By 1799, the Potowmack Company opened the Potomac, 30 miles above Cumberland, and the Shenandoah, 60 miles above Harper's Ferry, by building a system of locked canals around the falls. "Thenceforth, between 1799 and 1828, a considerable local traffic was developed chiefly in flour and whiskey brought downstream" (Harrison, p. 546). After 1828, its works and franchises were conveyed to the Chesapeake and Ohio Canal Company which was chartered in 1824. The Alexandria Canal was an extension of the C & 0 from Georgetown by way of an aqueduct across the Potomac. Once located near the present site of Key Bridge, the aqueduct was closed in 1886 as being unsafe.

Yardley Taylor writing c. 1830 recalls when "Many of us can remember when it was usual to pay a dollar for transporting [sic] a barrel of flour to market" (Taylor, p. 25). With the completion of the Little River Turnpike and the commencement of construction on the Leesburg Turnpike, the cost had decreased to 75 cents per barrel. The opening of the Chesapeake and Ohio Canal further reduced the cost per barrel to 45 cents, and Taylor cites that such cheap and available transportation presents a "strong argument" for the railroad then projected.

In 1832 an elaborate scheme was launched to improve Goose Creek and Little River with "slack water" navigation in order to capture the "wagon trade from the Valley" and "provide cheap transportation to market ... for the product of the many flouring mills then in operation on the waters of Goose Creek" (Harrison, p. 551). This close proximity to water transportation would certainly have benefitted Waterford as well, since goods would have to be hauled overland less than ten miles. Survey work was not completed until 1849; by then, the Manassas Gap Railroad was already in place to more efficiently handle the same traffic. That, combined with the tremendous cost overruns of the initial construction, caused the demise of the Goose Creek Canal after only the first lock was completed.

At the same time the C & O Canal was chartered, the Baltimore and Ohio Railroad received its charter. Work was suspended on the link that would connect Loudoun County as the two rivals litigated for rights over the Catoctin Gap at Point of Rocks (Harrison, p. 548). Already the railroad had begun to take precedence over the canal. The B & 0 Railroad reached Cumberland, Maryland in 1843, whereas the C & 0 Canal was not completed as far until 1850. By 1852 the rail line had already reached the Ohio state line at Wheeling, monopolizing the area that the canal had hoped to serve.