Loudoun County and the Civil War
A County Divided

Loudoun County suffered possibly more severely during the Civil War than any Virginia County in which no major engagement was fought.

Loudoun was formed from the northwestern part of Fairfax County in 1757. It embraced an areas of 519 square miles; bounded on the east and north by a 37 mile stretch of the Potomac River; on the west by the watershed of the Blue Ridge Mountains; and by the counties of Fauquier, Prince William, and Fairfax on the south and southeast. The census of 1860 showed the county to have a population of 21,774 — of this total there were 15,021 whites, 1,252 free blacks, and 5,501 slaves.

Due to the character of the early settlement, it became a county divided in sentiment at the outbreak of the war. Planters of cavalier stock had pushed up from the Tidewater area of Virginia to establish large holdings in the southern part of the county; while the Germans and Quakers had come down from Pennsylvania to take up small farms north and west of the Catoctin Mountains at the top of the county. Thus, at the time of secession, the eastern and southern sections were predominately Southern in their views, while to the north and west the people were equally strong in their pro-Union sympathies.

Loudoun's politics had been, up to that time, basically Whig, and despite the growing issues of contention between the states, the county had held firm for the preservation of the Union in which Virginia had been so instrumental in forming. On 13th of February 1861, Loudoun sent two pro-Union supporters — John Janney and John A. Carter — to the Virginia Legislature convention in Richmond where the key question of secession was to be discussed. Both men continued to raise their voices to the opposing secession as the deliberations dragged on for over two months. Unfortunately, the powerful and aggressive faction of secessionists at home was working tirelessly, and at a mass meeting held in Leesburg fluent orators swayed the assembled crowds into passing a county resolution endorsing an Ordinance of Succession.

On April 17, the Richmond convention passed the Ordinance of Secession by a vote of 85 to 55, subject to approval by the people at a special referendum. Janney and Carter, still opposing a divided Union, voted against the Ordinance. The sentiment in Loudoun, however, had changed to the contrary when the county voted 1,626 to 726 to endorse ratification of the Ordinance on May 23rd. The county remained itself divided for the northwestern section voted more than 7 to 1 against the ratification, while the eastern and southern sections voted strongly to support it. Several precincts in the south end of the county voted unanimously for its adoption.

Virginia had withdrawn from the Union to join the Confederacy, and when Maryland failed to secede, as had been hoped for, added emphasis was placed on Loudoun as a border county. When the citizens of the western counties of the Commonwealth refused to secede, and severed the state to form West Virginia, Loudoun was placed in the unique and dangerous position of bordering two states that were to remain with the Union. The natural geographical boundaries of the Blue Ridge and the Shenandoah River offered little protection against invasion. With average river conditions, the Potomac offered eight points of entry into Loudoun from the Maryland shore, and from newly formed West Virginia one river crossing and a low mountain pass.Early in the war General Thomas J. Jackson's Confederate troops burned Potomac bridges, including this one at Harper's Ferry. 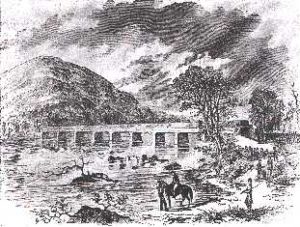 Early in the war General Thomas J. Jackson's Confederate troops burned Potomac bridges, including this one at Harper's Ferry.

On June 9th, Colonel Thomas Jonathan Jackson (later to be christened as the famous “Stonewall” Jackson) ordered the bridges burned at the top of Loudoun county. Those entries at Point of Rocks and Berlin (now know as Brunswick) Maryland were destroyed, but there was still numerous fords along the river that could only be defended by forts and stationed troops.

Three forts were constructed near Leesburg to defend the town: Fort Johnston (later Fort Geary) atop Catoctin Mountain on the north side of present Rt 7 one mile west of the town; Fort Beauregard on high ground two miles to the southeast; and Fort Evans, a mile east on the Edward’s Ferry Road. Militia companies were called up in the county, and volunteers hastened to join.

The county furnished men to more than 20 Confederate units, but most went principally to Col. Turner Ashby’s 7th Virginia Cavalry which fought in all of the Shenandoah Valley campaigns. Others joined Col. E. V. White’s 35th Battalion Virginia Cavalry; Colo. John S. Mosby’s 43rd Battalion Virginia Cavalry (the famed Partisan Rangers); Col. R. W. Stribling's Battery of Artillery of Longstreet's Corps; Col. Montgomery Corse's 17th Virginia Infantry which were sturdy fighters under Longstreet; and Col. Eppa Hunton's 8th Virginia Infantry, a regiment that saw hard service throughout the war and at Gettysburg charged with Pickett's command only to reel back a broken regiment with less than 20 survivors which earned it the sobriquet of "the Bloody 8th".

While Confederate recruiting continued, many Loudoun County citizens with Union sympathies slipped past the river guards to enter Maryland and join Federal units. Col. William Maulsby's Potomac Home Brigade, and Major Henry Cole's Battalion of Maryland Cavalry received the majority of these men. Cole's Cavalry did much fine service along the border and into the Shenandoah Valley throughout the war. To further aid the cause of the Union, Cap. Samuel Means of Waterford organized two companies of cavalry known as the Loudoun Rangers, the only organized body from the State to enter Federal service.

With the exception of the battle at Ball's Bluff, Loudoun's engagement could only be termed "skirmishes," but these were fought with a far more deadly seriousness of purpose than the usual scattered fire of pickets or outpost guards — for here it was brother against brother, and friend against former friend.

With the Potomac offering good crossings, both the Army of Northern Virginia and the Army of the Potomac moved through the county for the two Northern Campaigns. General D. H. Hill burned a wide area as he evacuated Loudoun in March of 1862. In 1864, Gen. Sheridan burned the rich farmlands between the Blue Run and Catoctin Range, and the Blue Ridge, to prevent Mosby's Rangers from receiving food and forage from that section of what was called "Mosby's Confederacy." This, combined with the constant raids of both Union and Confederates, laid waste to a once beautiful and productive agricultural land.