Indians Left Their Mark in Naming Landmarks in Loudoun County » 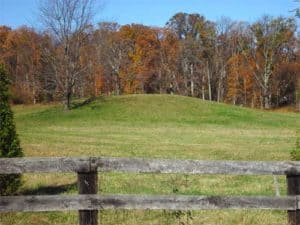 Indian mound off Route 15 and Foxfield Lane south of Leesburg

Many years ago, at the Purcellville Library, which was then the only public library in Loudoun County, I came across a set of small scrapbooks filled with undated clippings from unidentified newspapers. One told of a battle in the county between the Catawba and Delaware tribes. But because I didn't think either tribe lived in the area, I dismissed the article as legend.

Through the years, however, certain archaeological sites have almost convinced me that some battle took place sometime during the 1500s or 1600s in what is now the Route 15 corridor. During this period of initial European exploration and settlement of America's East Coast, anthropologists think there were upheavals of Indian groupings, caused in part by uncertainty as to which tribes were allied with the whites who came in large ships.

In my 1975 book, The Guide to Loudoun, I briefly mentioned an Indian mound seven-tenths of a mile south of Route 15 and Gleedsville Road (Virts Corner) [at the intersection of Foxfield lane and Route 15]. I called the mound "legendary," and using information from the newspaper clipping, I added that it was purportedly a "Delaware Indian burial mound, erected by that tribe after their defeat in battle by the Catawba."

Subsequent investigations of the mound by then-state archaeologist Howard McCord found no bodies, although he did not explore the ground underneath the mound or close to it.

I was tantalized by reports of people who lived within sight of the mound. They said that as far back as they could recall, people who appeared to be Native Americans would come to the mound in early morning or late evening and leave feathers, trinkets and arrows. Those visits continue today.

I assumed the mound was of Tuscarora origin, as there were several similar mounds in Loudoun and Fauquier counties along the Tuscarora migration route north, which followed present day Route 15. The Tuscarora had been defeated in North Carolina by the British, who guaranteed the tribe safe passage during the 1710s and early 1720s to join their Iroquois allies in central New York.

Frequently, as I drove south on Route 15, the mound and the purported battle prompting it were never far from my thoughts. They became paramount some months ago when I received the following message on my answering service: "My name is John Rocca. I'm a Tuscarora Indian." He had read my article, Indians Left Their Mark in Naming Landmarks, on the origin of Indian names in Loudoun and Fauquier and was curious that I had mentioned place names with Tuscarora origins.

I called Rocca, and we got together for breakfast. I learned that his grandfather, a full-blooded Tuscarora, farmed near Lovettsville during the early 20th century. Rocca alluded to a great Indian battle that had taken place near his grandfather's farm, in the vicinity of Oatlands and Courtland Farm, a few miles south of the mound near Virts Corner.

Rocca told me the site came to him "in a sweat on an Ojibway Indian reservation" inhabited by the Kettle and Stony Point band on the shores of Lake Huron in Ontario, Canada. The Ojibway, an Algonquin tribe that at times lived in eastern Loudoun, were friendly with the Tuscarora.

A few days later, I had a doctor's appointment, and my physician, John H. Cook III, began talking about area Native Americans. His son, Harrison "Ted" Cook, is an anthropologist and expert on digitizing map and geographic data. Cook told me his son spoke of an Indian battle or village at the spot where Little River flows into Goose Creek -- the same area Rocca mentioned.

Ted Cook and I spoke over the phone, and he remembered the meeting place of the two streams as a site where builders of the Dulles Greenway had to preserve wetlands in exchange for wetlands destroyed during construction of the privately operated toll road. He recalled that the site was large, laden with artifacts and had the potential to be named a national historic landmark, the highest honor accorded to an archaeological or historic site.

I began to hunt for the scrapbooks I had seen 30 years ago but couldn't find them. I did come across an article titled History and Traditions of "Greenway" in a 1903 edition of The Record, a short-lived Leesburg newspaper.

Greenway, I remembered, once encompassed the reported Delaware Indian mound. The farm, now a few acres with an early-19th-century brick house and pristine frame and brick barn, a mile south of the Leesburg bypass, was initially a 640-acre grant from Thomas, 6th Lord Fairfax to William Mead.

Mead, a Quaker, took out his grant in 1746 and named it for a Capt. Greenway who had piloted his grandfather, also William Mead, from England to Philadelphia in the late 1600s. The detailed article bore no author's name, but its emphasis on genealogy and on events that took place at Greenway led me to believe it was by a Mead. The family owned Greenway into the 1880s.

Toward the end of the article, the writer spoke of the younger William Mead and his wife, Eleanor, observing the Indian mound from their log house: "The first spring year the Meads were domiciled in their Virginia home, one calm spring evening . . . they saw the shadowy Indian forms among the ancient trees, and heard the rise and fall of that melancholy death chant. Before the dawn of another day these strange guests had left to be seen no more until the next year."

The article continued by relating how each year, fewer Indians visited the mound, until "at the usual time, about the first of May, but one solitary Indian warrior appeared. . . . He performed all of the customary rites, and made his last offering of arrows."

The article also described the battle preceding the building of the mound.

"A large band of Delawares pushing into the territory of the Catawbas had severely punished that tribe, and victorious, were traveling northward to their home. The Catawbas followed and unexpectedly fell upon them, having overtaken them at the Potomac [River].

"Terrible and swift was their revenge, yet such were the fighting qualities of the Delawares thus brought to bay, that the Catawbas were forced to retreat without prisoners. But when the remaining Delaware warriors looked upon their dead strewn over the ground, they saw the flower of their tribe . . . too far to be carried to their own hunting grounds.

"So there they were buried, and year by year the surviving braves of the Delawares returned to this memorable spot, to sing their solemn death chants, to weave their magic dance around the mounds, and make their offerings of arrows and food, that the departed warriors might lack nothing."

Although the article implied the battle was fought at or near the Potomac River, the purported burial mound is six miles from the river at its nearest point. So the battle location did not jibe with the location of the Indian mound, which the article said was at the battle site and was in the southern part of the 640-acre grant.

As both the Potomac River and Goose Creek had similar Indian names until the early 1700s, Cohongarooton (for the Potomac) and Cokongoloto -- both meaning stream of swans or geese -- I wondered whether through the centuries the trapper or Indian who first related the battle story to the Meads, or to one of the Meads, transposed the stream names.

The article also said there was more than one mound, and there is another mound on the east side of Route 15 that is similar to the tree-topped hillock many of us are familiar with on the west side of the road.

I then called the Virginia Department of Historic Resources in Richmond. Archivist Quatro Hubbard and archaeologist Ethel Eaton told me the 16-acre Goose Creek site was investigated in 1994 by the Alexandria firm John Milner Associates Inc., which determined it was an Indian hamlet of the late Woodland period, which dates from about A.D. 500 to the early 1600s. Early in that epoch, Indians had replaced spears with bows and arrows and were planting corn and beans. Their villages of wood and thatched huts were used until soil wore thin or they were threatened by predator Indians. The last centuries of the late Woodland marked the era of unrest brought by sightings of Europeans.

Eaton said the carbon-14 dating of charred nut and shell fragments from the Goose Creek site dated them to 1160 to 1400, with a margin of error of 70 years.

As the 1994 investigations were of a preliminary nature, the area surrounding the 16 acres was not examined for traces of a battle. Milner's archaeologists recommended further explorations in the area